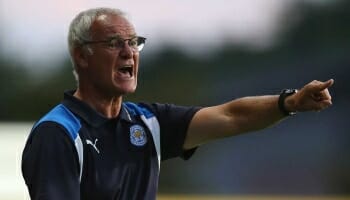 Leicester enjoy a welcome break from their Premier League relegation worries when hosting Derby in Wednesday night’s FA Cup fourth-round replay and will be keen to claim a confidence-boosting win.

For the Rams, this is a distraction from their bid to gain promotion from the Championship, but both sides certainly looked up for the cup in the first encounter at iPro Stadium, when Wes Morgan’s late header earned the Foxes a 2-2 draw.

Leicester’s amazing fall from grace continued on Sunday as a 3-0 home loss to Manchester United consigned last season’s champions to a fourth straight league defeat and left them just one point above the drop zone.

Goalkeeper Kasper Schmeichel described recent top-flight results as “terrible” and “embarrassing” but added: “We’re a group of players who are low on confidence but certainly not low on fight. We’ll fight to the end, whatever that might be, and I can guarantee every player in there is hurting.”

The Foxes fell apart once going behind against United, but they had previously battled hard in an unlucky defeat at Burnley and should be able to play with less fear now switching back to the cup, having won at Everton in the previous round.

Claudio Ranieri’s side has been a touch unfortunate to come up against elite teams like United and Chelsea at King Power Stadium of late, but their overall home form is solid, with five wins and three draws from 12 league games here, so we’re backing Leicester at 3/4 to recapture some sparkle and prove a cut above Derby.

Derby have picked up plenty of points in the Championship over the past three months and are still very much in the race to make the play-offs, but there is a feeling that Saturday’s 1-0 loss at Newcastle again exposed their limitations.

Steve McClaren’s side has proven adept at seeing off teams below them in the table, but there have also been defeats in bigger games against Huddersfield and Leeds, so we’re happy to take them on here.

Leicester created plenty of chances in the first clash at iPro Stadium and we like 37/20 for a home win and over 2.5 goals in the game, while 31/10 for the Foxes to really open up and score at least three times themselves also catches the eye.