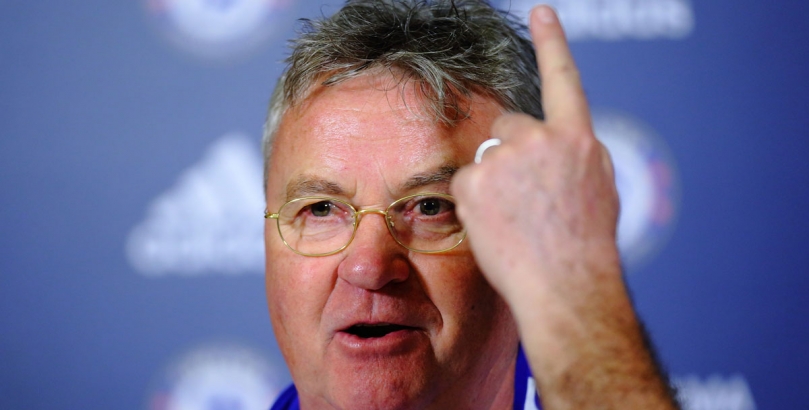 What all-round football man Ray Wilkins lacks in locks he makes up for in acumen where his views on Chelsea’s current managerial situation are concerned.

In the case of Guus Hiddink, he certainly has an inside track. Among others to have taken the Chelsea reins, Wilkins assisted the affable Dutchman in his previous interim stint back in 2009.

The pair went on to lift the FA Cup together, adding an unexpected splash of glory to a campaign that had threatened to greatly underwhelm, after a run of just two wins in eight Premier League matches saw Luis Felipe Scolari axed.

After a far more cataclysmic disaster than that this season, Hiddink has been called upon again and it’s safe to say he’s quickly got business taken care of.

Chelsea’s recovery in in rude health; having been 16th and two points above the relegation zone when Jose Mourinho was sacked, 12 games later under Hiddink they are 10th and eight points off fifth.

However, as it stands, despite not only steadying the Chelsea ship but navigating it northwards at a rate of knots, Hiddink is a 14/1 chance at bwin.com  to be given the gig permanently, while Italy head coach Antonio Conte is as good as installed according to the bookmaker at 1/20.

Surely before any deal is officially sealed, owner Roman Abramovich should listen to a man he’s trusted with coaching roles previously.

“For me, (Hiddink’s) the ideal person to take over,”said Wilkins. “You can see the way he’s galvanised the squad.

“They’re putting in a great shift of work and looking as if they’re going to win more games than they lose. It’s going to be very, very interesting to see where they can finish.”

Pointing to the two men who have been consistently linked with replacing Hiddink at the end of the season – Conte and Atletico Madrid’s Diego Simeone – Wilkins also raised question marks over a potential language barrier and the gamble of neither man having Premier League experience.

He added: “Guus knows how it works, he knows the Premier League, he knows the amount of effort the players have to put in. Our league is played with the highest intensity of any of the leagues in the world.”

Having worked so closely with the former Netherlands national coach, suspicions that Wilkins is simply sticking up for a pal are bound to creep in, but his views are heartfelt where his boyhood club are concerned and it’s difficult to disagree with his recent musings.

Football, as we are so often reminded, is a results game. Hiddink can hardly be faulted on that front either now or during his previous spell in the Blues dugout.

The former PSV boss is unbeaten in a dozen Premier League games (winning the last three), has seen Chelsea into the FA Cup quarter finals and has a decent chance of guiding the Blues into the Champions League last eight.

If that 2-1 deficit to Paris St-Germain can be overturned, the case Wilkins is making grows stronger still.