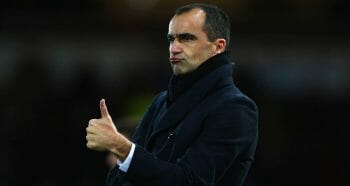 Die Roten technical director Michael Reschke was present to see the Belgian score the third in the Toffees’ 3-1 win over Aston Villa in midweek according to widespread reports.

Competition for Lukaku, who has registered 18 Premier League goals this season, is understandably stiff, with Paris Saint-Germain and Chelsea allegedly interested too.

The Sun state Everton would demand double the £28m they paid for the 22-year-old before they would even contemplate selling, but the Merseysiders’ track record of exporting to the elite suggests if the player wants to keep on impressing, he’d be best off staying at Goodison Park.

Several players have been pilfered from the Toffees’ ranks in recent campaigns, though almost all of the outgoings have fared notably worse after their exits.

Marouane Fellaini, an attacking force to be reckoned with at Everton, is the most recent and high profile of these expensive flops, moving to Manchester United for £27.5m and consistently underwhelming.

Lukaku’s compatriot was brought to Old Trafford by former manager David Moyes, so obviously had a greater opportunity to succeed than any of his fellow cherry-picked former teammates. Despite these advantages, he has struggled.

Mikel Arteta, Joleon Lescott, Steven Pienaar and Jack Rodwell are other noteworthy examples of those who failed to replicate their Everton form following a big-money move. Both Arteta and Lescott have had their moments, but neither shone with their new clubs to the extent they did with the Blues.

The careers of players such as Leighton Baines and Phil Jagielka, who have been consistent performers for the Toffees across several seasons and resisted the overtures of bigger fish, weren’t compromised for staying put, with the duo among a group who established themselves as internationals on the back of their standards set on Merseyside.

While Lukaku is undoubtedly talented enough to have an impact at Bayern, whether he is of sufficient stature to have a system tailored to his strengths at the expense of FC Hollywood’s current attackers is debatable.

Indeed, whether rightly or wrongly, he has already been deemed not good enough for Chelsea once in his career and the track record of his predecessors suggest he would experience the same difficulties at the Allianz Arena.