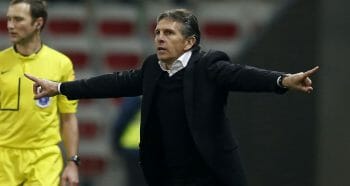 Since Southampton returned to the Premier League for the start of the 2012/13 campaign they’ve performed remarkably well, exceeding expectations both on and off the pitch.

The Saints have improved their finishing position season upon season, going from 14th to sixth.

An achievement made all the more laudable by the continuing state of flux at St Mary’s with players and managers changing more frequently than the shadow cabinet.

Rather than fall victim to their own success though, Southampton’s seamless replenishment from within and shrewd purchases in the transfer market have kept the club challenging for Europe over the past three seasons.

Big profits continue to be spun on sales such as Sadio Mane’s £34m transfer to Liverpool. Nevertheless, the latest transfer targets widely reported in the press may give cause for some concern.

Spaniard Juanmi made a particularly inauspicious start to life at St Mary’s after joining in June 2015, failing to score in any of his first 13 appearances.

Liverpool’s purchases of Luis Alberto and Iago Ispas (stop sniggering) yielded similarly disappointing results, while Joselu at Stoke hardly set the Premier League ablaze with four goals in 27 games for the Potters, albeit the striker had been plying his trade in Germany latterly.

Even high-profile imports like Pedro at Chelsea or Ander Herrera at Manchester United have struggled for some reason of late, possibly due to the extra physicality and frenetic pace of the English top flight.

Of course, traditionally many Spaniards have become hugely successful, even iconic, in the Premier League era, but just at the moment it seems a risky ploy to pilfer La Liga’s mid-range stocks, even for a club as canny as Saints.

Southampton are 7/2 to make the top six again this term.