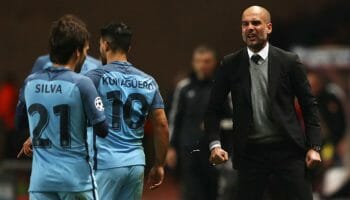 Once the international break is out of the way, attention will switch to the business end of the domestic season as the fight for trophies, Champions League qualification and survival come to a head.

In all five of Europe’s main leagues there is plenty still to play for so we have looked at an often undervalued source of information to gauge which clubs are likelier to prevail: the fixture list.

We have used our latest odds to work out both the clubs still in with a decent chance of either securing Champions League football or dropping out of the top flight next season and also to identify how many of the remaining fixtures they have against clubs also in one of those situations. These have been colour coded in the graphic below – with grey being used for matches against teams in neither grid – to grade the toughness of each club’s run-in.

Chelsea’s success may have made the Premier League title race boring but the intensity of the battle for a top-four spot more than makes up for it. With five clubs fighting for the remaining three spots, it looks set to go down to the wire and the contrasting fates of the two Manchester clubs is particularly interesting.

Not only is there a Manchester derby still to play, but Pep Guardiola’s City face three relegation battlers in their last four matches while United have Arsenal and Tottenham in two of their final three. Teams in trouble will have far more to play for, but if any have already been relegated by the time they face City then Jose Mourinho could have a ready-made excuse if United don’t make the final cut.

At the bottom of the table, Sam Allardyce has his work cut out to avoid a first career relegation from the top flight. His Crystal Palace team are the only relegation candidates who still have to face every club in the current top six, while fellow strugglers Hull and Swansea only have two such games remaining.

We could also see the fate of the Tigers and bottom club Sunderland decided in dramatic style, with the two playing each other at the start of May and then facing another six-pointer in their next match before taking on a top-six challenger on the final day.

Barcelona’s next five matches could be decisive, with three of them coming against fellow members of La Liga’s current top six. This sequence culminates with El Clasico and then leaves them with only one other tough game in their final five.

Beneath them, Sevilla’s prospects of taking advantage of any slip depend on how they handle five remaining games against relegation battlers: the joint-most of any top six club. Should those sides be motivated by securing their own survival then it may not be as straightforward as it looks to gain ground on Barca.

At the sharp end, bottom side Osasuna have it all to do but have been given a lifeline in the form of four home games against fellow relegation battlers. If they or any of the other clubs sitting in the drop zone can put together a run then Malaga could well get sucked into danger, having still to play five of the current top six, including three in their final four matches.

Bayern Munich may be running away with the title once again but the clubs beneath them are far less widely separated. The Champions League race could well come to a head at the start of May when the four clubs immediately beneath the leaders face each other in a double-header, and it will be interesting to see where Hertha Berlin are at this point.

With four relegation battlers to play in their last seven fixtures, they have the most interesting run-in and the motivation of these struggling opponents could determine whether they are able to close the gap.

At the bottom of the table we could see a late dash towards safety by Ingolstadt, who only have one match remaining against clubs in the top five but now face four relegation six-pointers in their next five games. There’s also a final-day clash between Wolfsburg and Hamburg to look forward to, which could well send one of them crashing out of the division.

It’s not impossible for seventh-placed Milan to close the gap on the top three and the fixture schedule is set up for an intriguing finale to their season. Four of their next five matches are against the current bottom four and the last of those coincides with all six of the clubs above them playing each other. Therefore the motivation of the bottom clubs to avoid demotion to Serie B could define Milan’s season.

The Serie A relegation battle looks more settled than the others with the bottom three clubs already in pretty deep trouble, but with Genoa still having to face five of the current top seven there could be at least one side catchable by anyone making a late bid for survival. Palermo are a strong candidate as they only have two fixtures against the top seven remaining and their last three games are all ‘six-pointers’ against fellow strugglers.

French football has seen a far more open title race than many of the recent iterations, with Monaco and Nice both challenging PSG’s dominance. However, with overachievers Nice facing three of the current top five in their final four matches, their season could potentially end with a whimper. The other two sides – already sitting above them in the table – have just one such fixture left to play.

At the foot of Ligue 1, the relegation battle could well be decided on the penultimate weekend, when all of the current bottom four play each other. Encouragingly for bottom side Lorient, they only have one match remaining against an opponent challenging for a Champions League place, while the two clubs immediately above them each face three.