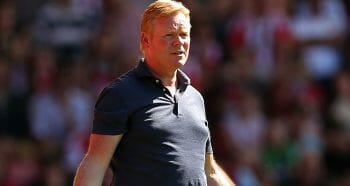 With a new owner having a key to the biggest transfer budget Everton have ever known and a new manager that has already proven he can compete in the Premier League, optimism is high that the Toffees can make a splash in the upper reaches of the top flight this term.

Farhad Moshiri is apparently prepared to offer Ronald Koeman a significant transfer fund to bring the squad up to scratch after finishing 11th in 2015/16.

The Merseysiders are priced at 11/1 to end up in the top four for 2016/17 and here’s an approach that would help them achieve that:

This was the joint-worst outside the bottom five of the top flight, with only Stoke City matching their inability at the back.

Bringing in a new defender has to be a priority for Koeman and he needs to be careful when making this decision.

Manchester City have shown that spending big money on foreign-based centre backs is a massive risk, with Nicolás Otamendi and Eliaquim Mangala failing to impress despite costing over £60m combined.

Therefore, Everton should look to make a domestic signing and they could do a lot worse than Crystal Palace’s Dann.

The Liverpool-born defender was the Eagles’ Player’s Player of the Year this term as he was integral to the Londoners making it to the FA Cup final.

As mentioned above, Roberto Martinez’ Everton team were poor defensively and Stones was a big part of this.

The 22-year-old only missed five Premier League matches in 2015/16 so can’t blame the number of goals shipped on anyone else, while he also made a number of costly mistakes, while he made four errors that led to goals, more than anyone else in the team.

For example, he allowed Sergio Aguero to ghost past him in the League Cup semi-final, with the forward finding the net to help send Manchester City to Wembley.

Furthermore, Everton only won 26% of games with Stones in the team, and won 73% of matches without him.

Despite this, the England international is reportedly being courted by a number of teams, with an apparent valuation of £50m, and the Merseysiders would be wise to sell him on to anyone willing to pay such a hefty fee.

Romelu Lukaku is the main man at Goodison Park and this has seen the 32-year-old’s importance reduced.

Even if the Belgian does get his desired move to a Champions League team, it’s rumoured that Koeman would want to bring Graziano Pellè with him to Everton, meaning Kone would still be playing second fiddle.

However, rather than moving him on, the incoming manager would be wise to utilise the Ivorian’s ability to contribute even with limited game time.