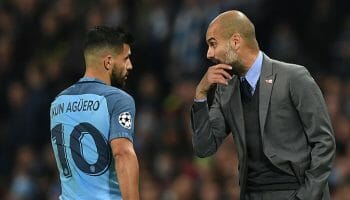 Manchester City have lost just one of their nine games at the Etihad Stadium and are currently on a two-match winning run at home. Both teams have scored in 78% of City’s home games this season, the joint highest percentage with Watford.

Burnley have the worst away record in the Premier League, with just one point and two goals to show from their eight games on the road. The Clarets are trying to win a third successive Premier League game following home wins against Middlesbrough and Sunderland.

City’s fine home record and Burnley’s poor form on their travels is reflected in the Trueform graphic, with the gap between each team’s marker suggesting Burnley have little chance of causing an upset.

Manchester City’s points return from their home games is outstripped by their away record, but they are still only 17/100 to record their third successive win on their own patch.

The game is one of contrasts as it pits a City side who have both scored and conceded in seven out of nine home matches against a Burnley team that has failed to score in six of their eight away matches. City to win to nil is 3/4, but to win and both teams to score is 37/20. However, our recommended bet is for one goal to be scored in the first half at 37/20 which has occurred in City’s last five home games.

Sergio Aguero scored twice in a 2-1 victory at Burnley in November and we fancy the Argentinian to get amongst the goals again, even though he was starved of service in the 1-0 defeat at Liverpool on Saturday. It should be a different matter at home though, so take a punt on Aguero scoring two goals against the Clarets at 9/5.

Burnley start 2017 buoyed by successive home victories over the festive period which has put them in mid-table heading into the second half of the season.

The Clarets have scored just two goals on the road but encouragingly netted at Tottenham, a team with the meanest defence on home soil. However, City have started to tighten up at the back with a couple of clean sheets in their last four games which makes the multiple score bracket of 1-0, 2-0 and 3-0 at 29/20 very attractive.

Burnley have recently conceded goals between 15 and 30 minutes, a tendency which has occurred in three of their last four away games, so we advise City to score during that quarter of an hour at 33/20. Finally, Burnley have drawn their last two visits to the Etihad and are a whopping 7/1 to make it three in a row.