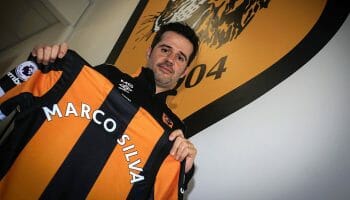 Hull fans are starting to believe that Premier League survival is a possibility following their 2-1 win against West Ham.

If the Tigers are to stay up they must continue to rely on their home form, which has produced four wins and two draws from their last six games.

Wednesday’s opponents need to start scoring soon otherwise a return to the Championship beckons, but until that happens the first recommendation in the Hull v Middlesbrough betting market is for the home side to prevail at evens.

Trueform tips: Hull’s reliance on their home form can clearly be seen here, with the Tigers struggling to transfer their performances on Humberside to the road. They will be keen to claim three vital points against a relegation rival before tough trips to Manchester City and Stoke.

Hull boss Marco Silva proved he can keep a cool head in a crisis when a change of formation from a three-man defence to a flat back four transformed his side’s fortunes in their comeback victory over West Ham at the weekend.

With 13 points from a possible 15 in their last five home games, the Tigers are on a roll and victory could move them out of the relegation zone.

Silva’s men have conceded in all but one of their Premier League games this season and although Boro have an allergy to scoring, they will have earmarked this match as one they can win.

On the face of it the Hull v Middlesbrough odds of 15/4 on the hosts winning and both teams scoring is attractive. A third successive 2-1 home win for Hull at 8/1 also appeals.

Middlesbrough have failed to score in their last five away games and the temptation is to mark them down for a sixth when they visit east Yorkshire.

However, Boro created chances in the goalless draw at Swansea and if Rudy Gestede had kept a cool head in the closing stages, they could have been walking away from Wales with three points.

Six of Boro’s last eight games have been goalless at the break and the same again looks tempting at 29/20, while more goals in the second half when the pressure is on to get a result also appeals at 23/20.