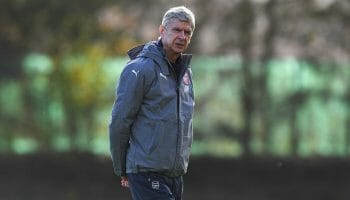 We’ve been tracking the latest Kylian Mbappe transfer news and rumours and have odds on where the French sensation will be playing following the summer window.

The 18-year-old is arguably the most wanted man in world football after enjoying a breakthrough campaign with Monaco last season.

Punters can get 19/20 for the Ligue 1 champions to keep hold of the teenage prodigy, but with other clubs queueing up to capture his signature, here are his most likely destinations.

Odds listed are for which team Mbappe will officially play for on September 6, with loan deals not included:

Despite winning La Liga and the Champions League, Real are not the type of club to rest on their laurels and always show an interest in improving their star-studded squad.

Cristiano Ronaldo may backtrack on threats to leave the Bernabeu over tax problems, but the 32-year-old can’t go on forever, so why not snap up a potential heir apparent.

Having Mbappe’s compatriot Zinedine Zidane in charge is another big selling point if a deal can be done, although connections will be wary of what has happened to James Rodriguez since making the same switch.

Fellow Frenchman Arsene Wenger has assembled a fine set of playmakers at Emirates Stadium and Mbappe could well be seen as the final piece of the jigsaw.

Olivier Giroud and Danny Welbeck don’t look like leading the Gunners to a Premier League title anytime soon, but Mbappe may have the talent to take them to the next level.

Any sale of Alexis Sanchez would sufficiently boost Arsenal’s coffers, but an alternative view is that snaring Mbappe may help them to hold on to their current prized asset.

The logistics of this move would make sense, allowing such a young starlet to stay in his native country as he continues to develop mentally, as well as physically.

Mega-rich PSG are still smarting from surrendering top spot in France and this could be the way to hit back and belatedly replace Zlatan Ibrahimovic.

City boss Pep Guardiola was able to witness Mbappe’s ability up close as Monaco knocked his team out of last season’s Champions League and couldn’t fail to be impressed.

The Spaniard has already shown he is happy to invest big money in youth with the capture of Gabriel Jesus, Leroy Sane and Bernardo Silva.

Money is no object for the Etihad Stadium heirarchy and adding Mbappe to the most exclusive creche in football would be the icing on the cake.

The Reds have thrown their hat into the ring, albeit with guarded hints that Mbappe may not quite fancy a switch to England at this stage of his career.

Jurgen Klopp’s style of play would suit the flying teenager and getting back into the Champions League is another boost, but this looks a major reach in our opinion.