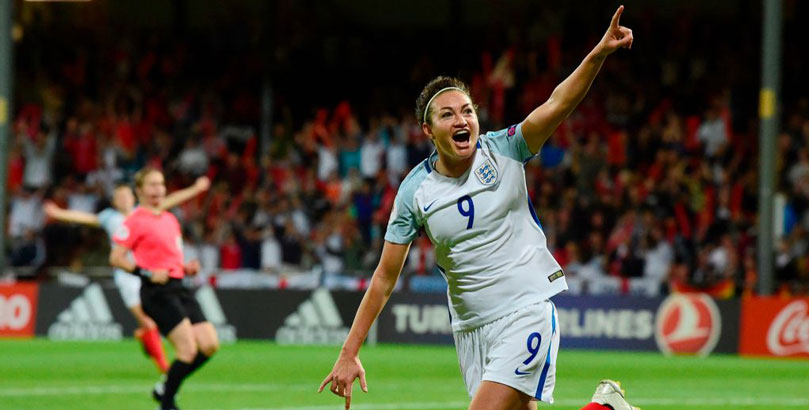 England must get past hosts Holland to reach the Women’s European Championship final but they are still rated worthy favourites to advance in Enschede on Thursday.

The Lionesses have built on finishing third at the 2015 World Cup by claiming four straight wins in this tournament, scoring 11 goals and conceding only once.

Injuries and suspensions have hit Mark Sampson’s side but we still like 31/20 for them to prevail in normal time from the Holland Women vs England Women odds.

England eased through the group stage by thrashing Scotland 6-0, beating Spain 2-0 and edging out Portugal 2-1 with a much-changed line-up.

The Lionesses then ended a 43-year hoodoo by overcoming France 1-0 in the quarter-finals, with star striker Jodie Taylor netting her fifth goal of the competition to settle that tie.

A broken leg for goalkeeper Karen Bardsley marred the triumph while midfielder Jill Scott is also ruled out of the game against the Netherlands due to suspension.

Sampson is confident he has the strength in depth to cope, though, stating: “Whatever it takes to get in this final, we’re willing to get it done.

“This team feel like we’re ready for anything that can be thrown at us and we can find a way to get the result we want.”

The Lionesses get the nod to prevail by a one-goal margin at 3/1 in our Holland Women vs England Women betting tips.

Holland are bidding to become the fifth hosts to lift this trophy in the tournament era and also boast a 100 per cent record at this point.

During the group stage, Norway and Denmark were beaten 1-0 before a 2-1 defeat of Belgium while Sweden were brushed aside 2-0 in the last eight.

After that last triumph, Netherlands coach Sarina Wiegman commented: “We were strong, we played as a team.”

Player of the match Jackie Groenen added: “It’s like we’re playing with 12 players with all the fans supporting us. It’s amazing having them behind us.”

Everything is set for a titanic tussle here but history does favour England, who beat the Dutch in the 2009 semis, drew 0-0 in Zwolle and won 1-0 in Manchester during the 2013 qualifying campaign and prevailed 1-0 in a November friendly in Tilburg.

The Lionesses are 3/5 to go through either in 90 minutes, extra-time or on penalties and that completes our Holland Women vs England Women predictions.