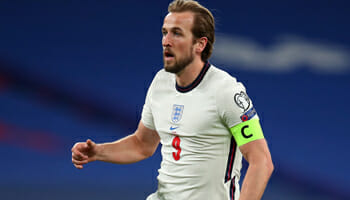 England’s youthful exuberance is expected to help them edge out an ageing Croatia outfit in the opening round of Euro 2020 Group D fixtures.

The Blazers famously prevailed when these teams met in the 2018 World Cup semi-finals, but the Three Lions have made better progress since then.

We’re happy to take 8/13 for Gareth Southgate’s side to come out on top at Wembley for our first England vs Croatia prediction.

England gained some revenge for going down to Croatia in extra-time in Russia by taking four points off their old rivals in the inaugural Nations League.

That included a 2-1 triumph at this venue, when Jesse Lingard and Harry Kane responded to Andrej Kramaric’s 57th-minute opener.

Kane was the star performer as the Three Lions powered through qualifying for this tournament, being successful in seven of eight matches.

A whopping 21 goals were scored in four consecutive home victories, while Kane netted a dozen of the 37 strikes achieved overall.

While the captain leads from the front, an exciting supporting cast has emerged around him.

Kyle Walker said: “It’s exciting times for English football to have them in the squad, to fit them all in a squad and playing all well, we will stand a really good chance to do something special.”

Southgate seems intent on employing an up-tempo, high-pressing gameplan and that can help England to overrun their opponents here.

Croatia looked at the peak of their powers when finishing as spirited runners-up to France at Russia 2018 but have been less convincing since that tournament.

The Blazers did manage to top their qualifying pool ahead of Wales, Slovakia, Hungary and Azerbaijan but were only workmanlike in a number of those fixtures.

Two Nations League campaigns brought little success and they were beaten 1-0 away to Slovenia in the opening set of World Cup games, before beating Cyprus and Malta.

Head coach Zlatko Dalic will hope there has just been a temporary drop in intensity and that being back on a bigger stage will spark a return to top form.

However, we fear the international retirement of Ivan Rakitic and advancing years of Luka Modric and Ivan Perisic have played a part.

Defenders Domagoj Vida and Dejan Lovren are also the wrong side of 30, so this could be a turning point before a period of transition.

If the Blazers do begin to tire late on, England have the pace up front and strength in depth on the bench to take advantage.

Let’s finish off our England vs Croatia betting tips by taking 21/10 for the hosts to score most goals between 75:01 minutes and full-time.