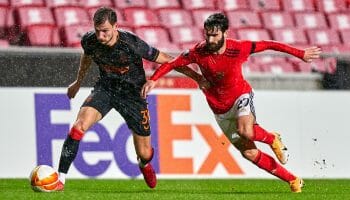 Rangers and Benfica are level on seven points each in Europa League Group D and could clinch their place in the knockout stage with victory here depending on the other result in the group.

Rangers have been strong defensively this season but the original meeting in Portugal three weeks ago was a different story as they shared a 3-3 draw.

The Light Blues were the better team for long periods, though, and are fancied to prove their superiority with a victory at 11/10 for our opening Rangers vs Benfica prediction.

Rangers went behind inside 60 seconds in Portugal thanks to Connor Goldson’s own goal but former Manchester City defender Nicolas Otamendi’s dismissal turned the game on its head.

Eagles defender Diogo Goncalves levelled the scores as he also netted at the wrong end before Glen Kamara rifled Rangers ahead.

Alfredo Morelos extended the lead early in the second half but Rafa Silva grabbed a lifeline for the hosts before substitute Darwin Nunez snatched an equaliser in injury time.

“I thought there were periods in the game where we actually played the best we have this season,” said Gerrard after the game.

“It’s certainly very mixed at the moment. It feels like a defeat because at 3-1 our game management and our order on the pitch should have been better to get us over the line.”

Subsequent 8-0 and 4-0 thrashings of Hamilton and Aberdeen respectively have further boosted confidence at Ibrox, with Ryan Kent and Kemar Roofe providing support to Morelos up front.

Such firepower suggests it’s worth taking an extra risk and backing a home win with over 2.5 goals at Rangers vs Benfica odds.

Benfica won their first two games in the group as part of a seven-match winning run in all competitions but their form has since deserted them.

The draw with Rangers was sandwiched between two league defeats, firstly a 3-0 loss at Boavista while they went down 3-2 at home to Braga on Sunday having trailed 3-0 at one stage.

Nine goals conceded in three games suggests there are problems in defence and the absence of Otamendi due to suspension will not help, but the defeat at Boavista was the only time this season that Benfica have failed to score.

A Rangers win and both teams to score appeals at 29/2 as our final Rangers vs Benfica prediction.