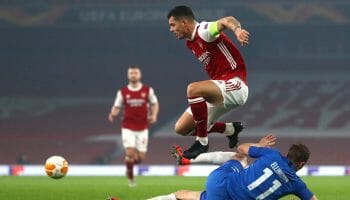 Arsenal are yet to drop a point in the Europa League this season and another victory in Norway would ensure qualification for the knockout stage with the minimum of fuss.

The Gunners have been struggling for goals in the Premier League but it has been a different story in Europe, where they have netted nine goals in three group games.

They were 4-1 winners at home to Molde earlier this month and another victory by more than one goal at 7/4 is our opening Molde vs Arsenal prediction.

A Look At Molde’s Betting Odds

Molde were dreaming of an upset at the Emirates Stadium when Martin Ellingsen’s long-range effort gave the reigning Eliteserien champions a shock lead.

They took advantage of a slow start from an Arsenal side which showed nine changes from the win at Manchester United the previous weekend.

Molde could not hold out though as own goals from Kristoffer Haugen and Sheriff Sinyan either side of half-time turned the tide, with Nicolas Pepe and Joe Willock wrapping up the win with fine finishes.

Molde had previously beaten Dundalk and Rapid Vienna by one-goal margins so have a good chance to qualify regardless of the result here.

A draw would be a useful result for the Norwegians so they may set up to be hard to break down, making under 2.5 goals a tempting pick from the 5/4.

Arsenal have not struggled in front of goal but it has been a different story in the Premier League.

They offered little going forward in a 0-0 draw at Leeds on Sunday and they have now found the back of the net only once in their most recent five Premier League fixtures.

They have not scored in open play since a 2-1 win over Sheffield United on October 4 and had just two shots on target at Leeds, with Pierre-Emerick Aubameyang a subdued figure after being given a rare central role up front.

“Every team is going to face challenges with the amount of fixtures we have,” said Arteta.

“We will see what happens but we will put a team (out against Molde) to compete in the way that we do now. Let’s hope that we can get some (players) back.”

This looks a tricky test but the Gunners should have enough quality to come through it and a 2-0 win at 9/1 is our final Molde vs Arsenal prediction.