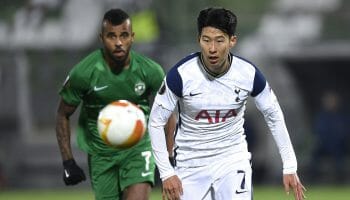 Tottenham were far too strong for Ludogorets when they met in the Europa League three weeks ago and should enjoy another routine win in the rematch.

The 3-1 victory in Bulgaria – which gave us a clean sweep of winning betting tips – was more one-sided than the final result suggested and Ludogorets are bottom of Group J after losing all three matches and conceding nine goals.

Spurs cannot afford to slip up given they are one of three teams all on six points so we fancy a home win by at least three goals at 3/4 as our opening Tottenham vs Ludogorets prediction.

Harry Kane only played the first half in Bulgaria but still had time to notch his 200th goal for the club, while he also provided an assist for Lucas Moura.

Kane had gone off by the time Claudiu Keseru threatened to make it an uncomfortable evening for Spurs early in the second half but Giovani Lo Celso’s goal just after the hour made the game safe.

The win should have been much more emphatic, with Kane also hitting the post early on.

Jose Mourinho made six changes to his starting line-up for the game in Bulgaria and said: “Tottenham is a better team, with better players. We didn’t need to play very, very well to win the game.

“Ludogorets is not a weak team, we are better than them and we showed this. We have to try to do the same when we play them in London.

“We started the game with ambition, which was different to what we did in Antwerp. So good attitude to start. We tried to kill the game in the first half.”

That will surely be the aim once again so Spurs to be leading after 15 minutes appeals at Tottenham vs Ludogorets odds.

A Look At Ludogorets’ Betting Odds

Ludogorets were expected to be the weakest team in Group J and that has proved to be the case, despite them scoring five goals in three matches.

They took the lead at home to Royal Antwerp but went down 2-1 and an Elvis Manu hat-trick was not enough to avoid a 4-3 defeat at LASK Linz before the 3-1 defeat at home to Spurs.

That will give them some hope of at least having something to cheer in London and Tottenham will be without the injured Toby Alderweireld, meaning Davinson Sanchez is likely to take his place.

Four of the five goals they have scored have come in the second half so there is nothing wrong with their fitness levels or team spirit.

Ultimately they do not have the same quality as Spurs, though, so let’s take a chance on a 4-1 home win at 12/1 as our final Tottenham vs Ludogorets prediction.