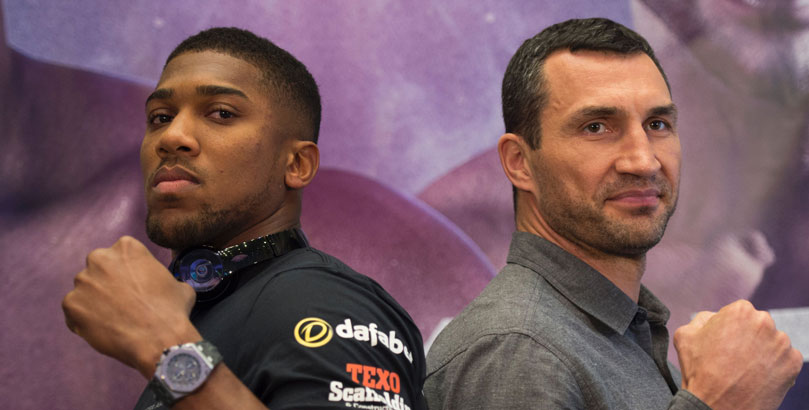 Anthony Joshua is the clear favourite to defeat Wladimir Klitschko when they fight at Wembley on April 29 but why is the former world champion – one of the finest ever heavyweights – considered the underdog? In the graphic below, we’ve identified six of the flaws the young Briton can exploit.

The one vulnerability Klitschko will never be able to improve is his chin. Three of his four defeats have come inside the distance and he is rarely willing to go toe-to-toe. Many of his opponents have been both limited and smaller; those unable to get into range to throw and land a threatening punch. Joshua is the same height and has a near-identical reach, so possesses the necessary size to close the distance as well as the belief in his power to land the punches that can hurt him.

Klitschko has long been both ambitious and competitive but doubts have grown about the extent to which that remains the case. Aged 41, with numerous interests outside of boxing and little left to prove, he has the further distraction of a family: his young daughter Kaya and partner Hayden Panettiere.

The lack of so few truly threatening opponents in recent years – David Haye, Tyson Fury and Alexander Povetkin are alone in representing more than a routine test – also means he has rarely had to leave the comfort zone of the centre of the ring from where his jab is so effective, or to pursue the stoppage. The death of his trainer Manny Steward in 2012 may have contributed to this: the great American regularly encouraged greater aggression and he has stopped only three of seven opponents since his death.

If there is not the same urgency under Steward’s successor Johnathon Banks, the inexperienced Joshua’s stamina may not be sufficiently tested should they reached the fight’s final rounds.

A common feature of many of Klitschko’s opponents was their willingness to fight in straight lines, effectively becoming an easy target for his preference to throw the jab-right-cross combination.

Those who demonstrated head movement and greater tactical flexibility – not least Fury and even Haye, who perhaps proved Klitschko’s most elusive opponent – posed greater problems.

Against Fury, Klitschko struggled to ‘pull the trigger’ – often the sign of a permanent decline. Against Bryant Jennings before that – a more relevant comparison given unlike Fury the American was a one-dimensional opponent – he had landed only 26 per cent of his punches.

Fighting on the retreat

Owing to the size and reach advantage he so regular enjoys, it has been relatively straightforward for Klitschko to dominate fights by claiming the centre of the ring and being the aggressor. Opponents are consistently forced to offer little resistance by remaining on the outside or to risk being knocked out – and swallowing numerous, concussive jabs – by attempting to close the distance.

Against those willing to attempt fighting in close, Klitschko would commonly look to clinch, not only to tie his opponent up, but to rest his body weight on them to drain their stamina, a tactic which too often has gone unpunished by referees.

Without a significant size disadvantage, Joshua won’t be so reliant on getting in close to land, potentially undermining Klitschko’s favoured approach.

If Joshua does succeed, should he choose, in getting close to Klitschko, not only could he look to land to the body, he likely possesses the strength to push Klitschko and disrupt his balance.

Doing so can create the space required to also land hooks and uppercuts, which is how this fight could potentially be won.

The consistent effectiveness of Klitschko’s jab means he has long only fought in one way, something that contributed to his defeat against Fury, who proved capable of forcing him into a different nature of fight. Albeit in a different way to Fury, Joshua’s speed similarly means greater variety will prove necessary, something which does not come naturally to a fighter who rarely targets the body, where Joshua’s stamina could be tested.

Opponents almost always recognise their greatest chance of success comes in securing the knockout instead of relying on a points victory but does Klitschko have the ability to change to nullify Joshua’s impressive threat?