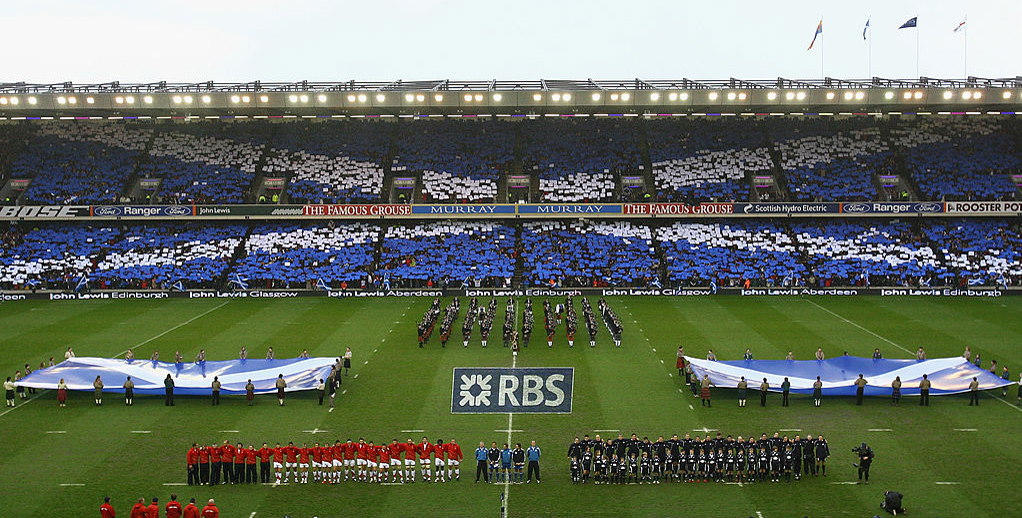 With the Six Nations taking place, many fans will be planning trips to watch their national team in action. It is not always easy to predict which journeys will be worth it though, so to help we have combined data from every match since the tournament was expanded in 2000 and the cost of visiting each city for the ultimate Six Nations venue guide.

The graphic below compares and ranks each of the six venues by what you are likely to see on the pitch and what the average fan will be spending off it (based on 2017 prices). This excludes match tickets and travel, which are largely dependent on the sort of experience a fan wants.

Starting with the most northerly venue and working our way south, Murrayfield is the first port of call in our Six Nations venue guide.

Unfortunately the Scottish national stadium does not rank too well for on-pitch excitement: it has a relatively high percentage of close games – defined as those settled by seven points or fewer – but that is largely because matches held there are the lowest scoring. It’s the only one of the six venues to have witnessed fewer than 40 points per match on average and only a shade over three tries, so go for low-scoring games in the Six Nations betting at this venue as Scotland host France and then England in the Calcutta Cup clash.

However, Edinburgh offers the cheapest beer – which could help to take the edge off a dull game – and is also the cheapest city to get around. It also ranks third out of six for both hotel and restaurant prices, so it could well be a decent option as part of a longer sightseeing trip.

Hopping across the Irish Sea to Dublin offers only marginally more point-scoring action but potentially better bang for your buck.

It’s one of only two stadiums to have seen over 40% of matches settled by seven points or fewer (we’ve included those held at the former Lansdown Road and at Croke Park while the new ground was being constructed) and only two locations have seen more Championships decided than the four which have been settled here.

Ireland is also the cheapest of the six countries to visit overall, with an average £62 per night for a three-star hotel the biggest factor. That should allow for plenty of spending money to make the most of the Six Nations odds as Ireland play three home games in 2018, including against Wales.

Heading back across the sea to Wales, we reach a stadium where there is a far more robust guarantee of excitement.

The principality offers a fairly average number of points and tries but the spectacle is often both fiery and decisive. The 37 yellow and two red cards that have been dished out here over the years is the highest tally of all and with six Championships won – plus four Grand Slams completed – visiting fans have been able to experience plenty of celebrations after the final whistle too.

Cardiff is not all that expensive either, with only Edinburgh cheaper for both beer and overnight stays, so it looks to be the best all-round option. Wales vs Scotland is here on the opening weekend of the 2018 tournament.

It will not shock anyone to learn that London is the most expensive city to visit in our Six Nations venue guide, with the average trip  for two people – based on a hotel, food, beer and day travelcards – clocking in at £179 before you have even added in the cost of match tickets and getting there in the first place.

That money also buys you plenty of action though: none of the other five stadiums can match it for either points or tries scored per match. Fewer than a quarter of the 45 Six Nations matches held there have been close-run affairs though, so for one set of fans there has rarely been much to cheer. That could all change though in the England vs Wales and England vs Ireland matches during the 2018 Six Nations.

Moving to the continent, there have tended to be much tighter games on offer in France, where 44% of contests have been settled by seven points or fewer – the highest percentage of any Six Nations stadium.

The Stade de France – which hosts France vs Ireland on the opening weekend – has also seen five Championships decided (the second-most) and – like the Principality Stadium – has seen four Grand Slams completed on its turf.

While Paris isn’t exactly cheap – particularly for hotels, which are even more expensive on average than in London – the low cost of eating out makes it marginally less pricey than the English capital overall.

Our last stop in the Six Nations venue guide – by virtue of being the most southerly – is Rome, where we have included the earlier matches hosted at the nearby Stadio Flaminio on the opposite side of the River Tiber.

The Italian capital ranks second for both points and tries scored, and with two thirds of the former and three quarters of the latter being in the away team’s favour, it has proved a popular destination for visiting fans. Good news for England supporters ahead of the Italy vs England game!

Thanks to cheap food – the joint most affordable with Paris – and travel, it is also a bargain option compared to either the French or English capitals.