Saskatchewan have made a fine start to the 2022 CFL season but Thursday’s trip to face a battling Montreal outfit presents a few problems.

The Roughriders have some key players banged up and make a long journey with little recovery time, so the Alouettes appeal on the spread.

We’re taking 1.91 for the home team with 3.5 points start in our first Montreal Alouettes vs Saskatchewan Roughriders prediction.

Montreal justified our faith on the handicap market when pushing Toronto close last Thursday, only going down 20-19 on the road.

The Alouettes were competitive throughout a game which became bad-tempered at times, but just found veteran running back Andrew Harris hard to contain.

Khari Jones will have been pleased with his defence, but faces question marks over the quarterback position, with Trevor Harris far from convincing after Vernon Adams picked up a knock.

Even so, that was another gutsy display in defeat, having lost 30-27 at Calgary in Week 1.

Being at home for the first time this term should give Montreal a boost, even if only three of last season’s seven wins came at Molson Stadium.

The feeling is that this will be a tight tussle which could go either way, with defences on top for the most part.

That makes 1.91 for under 45.5 total points worth adding to our Montreal Alouettes vs Saskatchewan Roughriders betting tips.

Following that bet would have paid off in all bar one of Montreal’s home matches last year.

Saskatchewan did us a favour when finishing strongly to prevail 26-16 at Edmonton over the weekend, as that result helped us to land a 6.97 parlay in our CFL predictions for Week 2.

Jamal Morrow did much of the damage, rushing for 126 yards and a touchdown, while signal caller Cody Fajardo completed 20 of his 26 passing attempts.

On defence, the Roughriders again impressed, adding five more sacks to the eight posted in a 30-13 Week 1 triumph over Hamilton.

Rotating their lineman on that side of the ball has worked well, but Saskatchewan’s strength in depth will now be tested going forward.

Offensive lineman Dan Clark is out with a broken leg and wide receiver Duke Williams is rated doubtful.

Returning from Edmonton to Regina and then heading east to Montreal will limit practice reps for any fresh reinforcements.

With longer to prepare and everything in their favour, Montreal Alouettes vs Saskatchewan Roughriders odds. 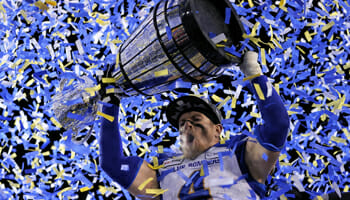