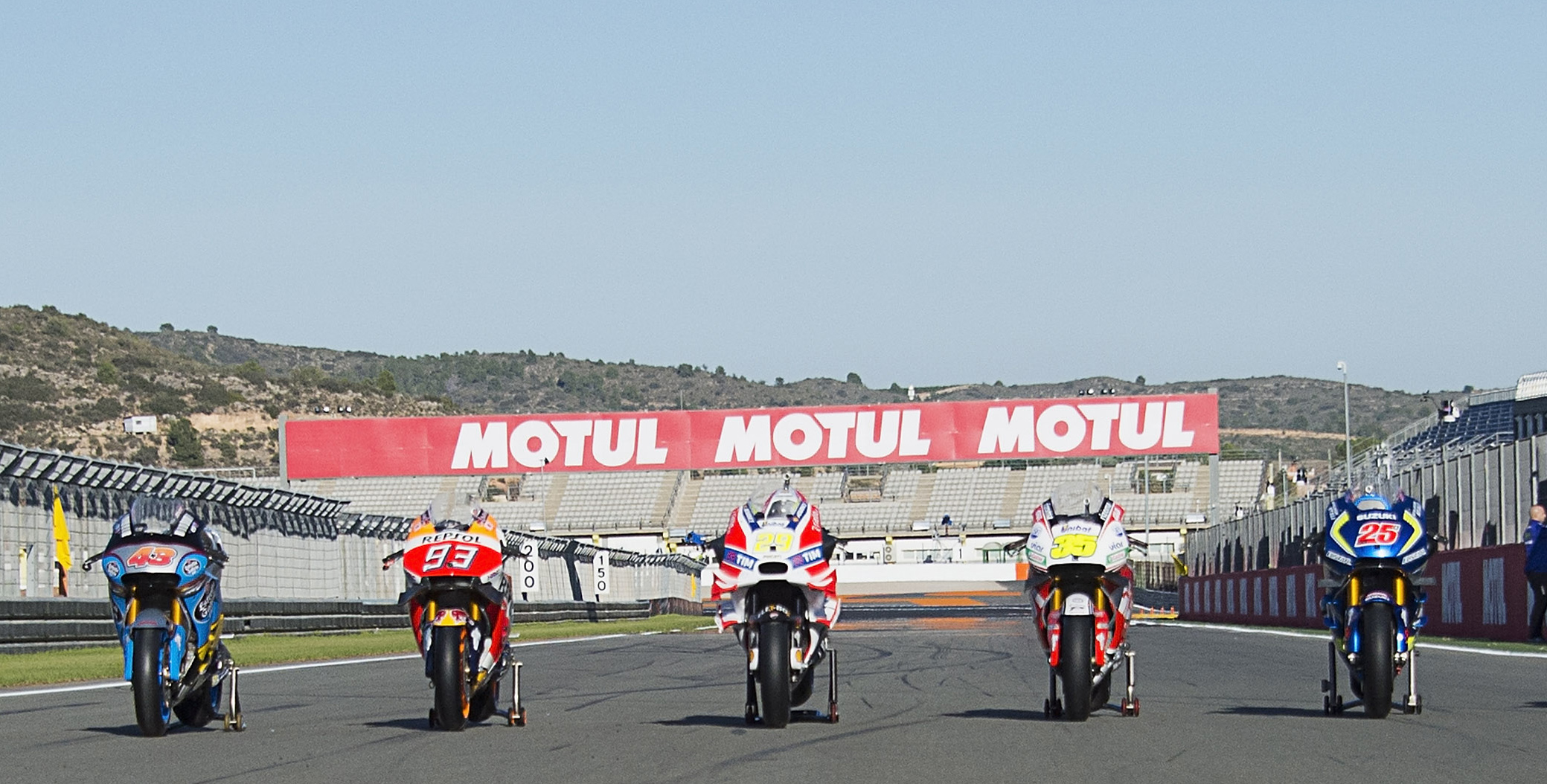 Keith Huewen is a former British champion and Grand Prix motorcycle rider who now commentates on the sport for BT. Ahead of the 2017 season, he discusses the state of the sport and the shortage of British riders, as well as the prospects for Valentino Rossi, Jorge Lorenzo and TT racer Guy Martin.

Why are British racers not challenging for the title in MotoGP? Obviously Cal Crutchlow won two races but we are seriously under performing. Is it because we have a lack of talent?

“It’s all about preparation – racers are getting younger and younger. When you look at the Spanish system, when you have competitors coming through from a young age, where they have the tracks and weather – it’s all sorted there.

“There are two reasons why our guys don’t do as well. They start later and there’s a distinct lack of sponsorship here in the UK. You mentioned Cal Crutchlow – he’s a great example. He is 30-odd years old, he’s a latecomer and he has had to come the long way through the British system.

“Up until 2018, when a new British Talent Cup series is launched, the British system really hasn’t promoted MotoGP. It leans far more towards World Superbikes and the production style of racing. The great Carl Fogarty was never given a viable opportunity on a Grand Prix bike, but was the world’s best for years on a superbike.

“It’s all very well dumping a kid on a Grand Prix bike but you’ve got to give that kid the time and technical help to get him ahead. Grand Prix was quite technical back in the day, but now it’s absolutely cutting edge – everything is brand new and that’s why we don’t have a pipeline feeding riders to MotoGP.

“Yet Dorna have now launched the British Talent Cup in London, and are supporting an independent British Talent Team in Moto3 GP, which will be great for nurturing young British talent. The UK has four MotoGP riders currently, but only one each in each of the feeder classes of Moto2 and Moto3.

“Young Scot Rory Skinner is a very exciting prospect to watch. He’s only 15 and has been in Spain but he’s set to do big things in the future.”

Is Valentino Rossi too old to win his 10th title?

“I’ve got to say age catches up with you. Rossi is 38 this year and unfortunately I think he’s going to find it’s a massive uphill battle. When you look at the grid, with the likes of Maverick Vinales and Marc Marquez, those are the guys to beat – they’re superstars.

“Rossi will go down as arguably the greatest of all time. He’ll win some races this year but he won’t win his 10th title in my opinion.”

Do you think Jorge Lorenzo moving to Ducati will help Rossi?

“That’s a good one. Even though they patched things up from the past, it is still only a patch! I think it’s every man for himself at the end of the day. There is no way Jorge will help Valentino Rossi – that’s just not going to happen, he is his own man.”

Guy Martin: is he as good as people think or is it self-promotion?

“He is a good motorcycle rider, but he is even better at PR – he is a television star more than a motorcycle rider. I think his personality is a little contrived from where I’m sat. I don’t know Guy personally, I’ll underline that now, but coming back to the TT is a big risk. I hope he comes out of it unscathed and retires from racing gracefully.”

Coming back to the TT, you don’t think he can win it?

“I don’t think he can win it without some kind of special circumstances intervening. Michael Dunlop’s going very quick – there’s a new breed of people at the TT. It has more variables then any other race so it’s impossible to say if Guy can or cannot win it. I don’t think John McGuinness is his biggest threat, that will always come from the TT track.”

Why don’t British Moto racers get recognition from competitions like BBC Sports Personality Of The Year?

“It’s annoying isn’t it? Every year we have the same argument amongst MotoGP fans and pundits. The fact of the matter is that we are still a minority sport to an extent.

“I do not understand why we don’t get more column inches in the media generally, we have so many great events, riders and a huge following on TV. The sport has a lot of money in it, with really big competitions, but we don’t seem to generate coverage. But does it really matter? I personally don’t like those sorts of personality awards – what’s personality got to do with it?”

Do you think we will ever see Lewis Hamilton on a racing bike and if so, how do you think he will do?

“I think we will see him on a racing bike. Michael Schumacher was absolutely rapid on a motorbike. If you go back to the late Colin McRae, he’s the fastest car man that I’ve seen on a motorcycle. Lewis has had a little sniff at it and I can imagine him doing it.

“We are all in awe of Formula One drivers but you only have to look at Mark Webber’s face when he was spectating at the TT and a 200mph bike whizzes two feet past his face, you understand how respected the sport is by other disciplines. I can see Lewis Hamilton on a bike, but how quick he will be depends on what’s going on in his head at the time.”