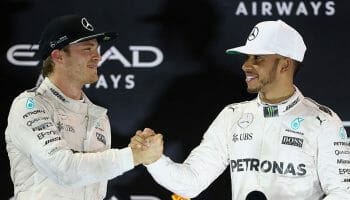 Lewis Hamilton may have missed out on a third successive Formula One drivers’ championship but he is the 6/4 favourite to bounce back to win the 2017 title.

Hamilton’s victory in the season finale in Abu Dhabi was not enough to prevent team-mate Nico Rosberg claiming the 2016 crown but there is plenty to suggest the Briton will be the man to beat next year.

For starters, the dominance of Mercedes this year means other teams will need to produce major improvements if they are to prevent another two-horse race between Hamilton and Rosberg for the title.

Mercedes, winners of the constructors’ championship for a third consecutive year, failed to win only two of the 21 grands prix this season and have started from pole in all bar one event. Their dominance is unprecedented and there is no sign of it ending any time soon.

That makes Rosberg at 333/100 good value to defend his title, with Red Bull’s Max Verstappen second in the betting at 3/1, but Hamilton has to be the pick based on his form when reliability problems with his car have not been an issue.

The German has delivered his best season and is a worthy champion but Hamilton has still hit the heights this term, with more pole positions and one more victory than his team-mate.

It was factors out of his control that were the main reason for relinquishing his title with Rosberg enjoying a trouble-free campaign while Hamilton suffered bad luck on more than one occasion.

In China he was unable to post a qualifying lap following an engine problem. He started last and recovered to finish seventh. At the next round in Russia, another engine failure in qualifying restricted him to 10th on the grid.

Hamilton also suffered an engine mode problem during the European Grand Prix and finished fifth. Rosberg won all three of those races.

Hamilton was also set to take the lead of the championship at October’s Malaysian Grand Prix only for his engine to blow up with 15 laps remaining.

There is no reason to suspect the misfortune will all work in Rosberg’s favour in 2017 and Hamilton remains the fastest driver in a fair fight. While his focus was questioned at times this season, he ended the campaign with four straight victories and can regain the title in 2017.