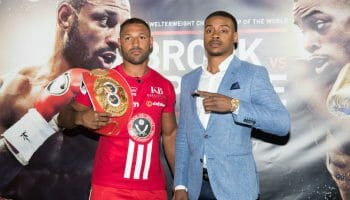 Kell Brook fights for the first time since losing his unbeaten record to Gennady Golovkin when taking on much-hyped American Errol Spence in Sheffield and this looks another tough test for the British boxer.

Special K will be defending his IBF welterweight title after moving up two divisions to face the fearsome Golovkin and how he handles shedding the extra 13lbs put on for that challenge could be crucial.

Brook’s body appeared in great shape when he switched to middleweight and draining back down could easily affect his durability and reactions.

That makes 81/50 for the challenger to prevail inside the distance appeal in our Kell Brook vs Errol Spence predictions.

Brook keen to bounce back

The 31-year-old Brook had previously established himself as a genuine world-class performer by racking up 36 straight wins, claiming this belt off Shawn Porter in California in August 2014 and successfully defending it three times.

He also gave Golovkin plenty of problems early on in their London encounter, before the Kazakhstan fighter’s superior power came into play and forced Brook’s camp to throw in the towel.

However, he has never been the hardest boxer to hit and Spence will be keen to test whether Brook has fully recovered from surgery on a broken eye socket.

Spence ready to deliver the Truth

Spence suffered a disappointing quarter-final exit at the London Olympics in 2012 but has rallied to post 21 straight wins in the paid ranks, 18 of which came inside the distance.

Former European champion Leonard Bundu was blown away in six rounds last August, while Spence previously impressed with a fifth-round demolition of Chris Algieri, who had gone the distance with Manny Pacquiao and Amir Khan.

Question marks remain over the challenger’s stamina, but that is only because he has never had to go beyond eight rounds before and we can’t see it being a problem if put to the test here.

No lesser judge than Floyd Mayweather has put Spence forward as the next big thing in US boxing and ‘The Truth’ admits he has drawn inspiration from the five-weight world champion.

“I look up to him as an athlete, because he stays focused,” said Spence. “He is a guy that has all the money in the world but he trains like he is broke.

“He has all the distractions – women, cars, money, everything that could distract an athlete – but he manages to stay focused. He has tunnel vision and that is what I respect about him a lot.

“I have to go out there and prove that what he says is true. I don’t see any pressure at all – I just have to stay focused, keep grinding and have that tunnel vision like he did when he was he was coming up through the ranks.”

That spells danger for Brook, who really could have done with a gentler reintroduction to the ring after a brutal beating last time out.

The champion will be brave, but the challenger has looked clinical when getting on top of opponents, so 333/100 for Spence to stop Brook in rounds seven to 12 takes the eye.

For those punters seeking a bigger price, 22/1 for an eighth-round victory completes our Kell Brook vs Errol Spence betting tips.