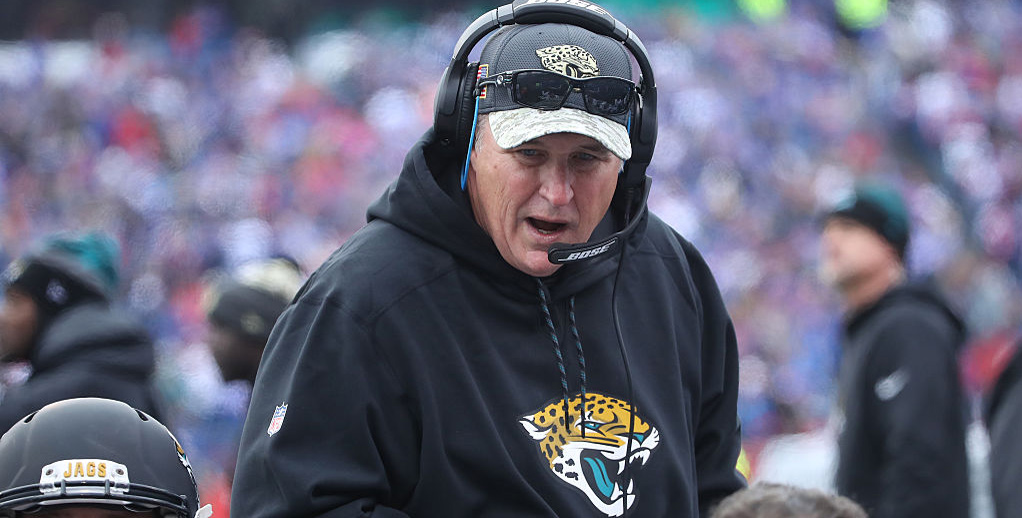 The 52-year-old New Yorker has been unveiled as Gus Bradley’s permanent successor as head coach of the Jacksonville Jaguars. Reporter Liam Blackburn spoke to him to hear his hopes for the team, his thoughts on returning to London for their fifth regular-season NFL game against the Baltimore Ravens next autumn and the development of American football in the UK.

What has the process been like going from interim head coach to permanent head coach?

“The first thought that went through my mind was, ‘Okay, I have to do a great job for the coaches and players in a tough time’. Everyone knows they were all part of our (3-13) record and what we are. You just think of that, go out and try to work the players and get yourself in a position to win a game.”

You left Buffalo in 2014 despite a 9-7 record, did you think it would take you so long to get another head-coaching job in the NFL? What did you learn?

“When I made the decision, obviously I didn’t have any more options to become a head coach for the following two years. I did, when I made the decision, have some options to go to different organisations, but I planned on coming down here with Gus and turning this thing around. That was the goal in my mind. We didn’t get it done but I have an opportunity as a head coach, which I appreciate.

“Any time in your life you need to learn from things that have gone on and I think I have learned a lot of things. You look back at my time in Buffalo, I don’t want to say second guess, but there are things you wonder if you could have done better and I’m sure there are.”

Tom Coughlin has been appointed as Jacksonville’s new executive vice president of football operations. How much are you looking forward to working with him, a former Jaguars head coach and two-time Super Bowl winner with the New York Giants?

“I’m fired up. Coach Coughlin and I both went to the same university – Syracuse. He’s a little bit older (18 years) than I am! So there’s a little bit of that connection. When I became head coach at Syracuse I really relied on coach Coughlin quite a bit with his knowledge and experience at the Giants, so we would meet quite a bit. Then at Buffalo we had built a bond, I would call him a mentor to me.

“We’ve had many talks about football for probably six years. There’s six years of building a friendship, I think it’s the best situation. Years ago you look at a team like Michigan and Bo Schembechler was the athletic director and he had two coaches work under him. What a great asset. You can walk down the hall and have someone to talk to, help you and make you a better coach. I’m excited about it.

“I don’t think any other coach in the league has a better situation in my opinion. I have the chance to work with someone who has won two Super Bowls and is a future Hall of Fame coach. I’m extremely excited.”

Who is making the coaching hirings? There was a report that Coughlin had blocked you from appointing Donnie Henderson?

“For us, it’s myself, coach and general manager Dave Caldwell, we’re all in it together. We want to make sure we make decisions together and what’s best for the organisation. This way there’s all checks and balances and we have one goal in mind and that’s doing what we need to win games. We make decisions in that process. It gives great information, insight – coach has helped me quite a bit already, just asking the right questions and what my thought process is. I’m pretty excited about that. It’s a collaborative environment where we’re all working together towards one common goal.”

Last year a lot was made about quarterback Blake Bortles’ poor mechanics. What does he need to do this off-season?

“It’s the same thing – we’re just going to go to work, he’s our quarterback, no different to any other player. People may say a quarterback, mechanics, but for our offensive linemen it’s technique, a receiver, getting off press coverage, a corner, his technique in press coverage. When you win three games that’s not acceptable so we all have a lot of work to do. I don’t want to say it starts with the quarterback – you hear that quite a bit. Everyone has to be willing to put the work in and the work starts now.”

You’ve played in London before. What was it like playing with the Monarchs in the early 1990s and how excited are you to be going back to Wembley as a head coach?

“I can’t tell you how excited I am. I might have played – and I don’t know this for a fact – more American football games at Wembley than probably anyone else. My first time was 1988 and I was with the Dolphins and we played the 49ers in an exhibition game. It was my first time in the UK. It was an outstanding adventure for me.

“After that it wound up taking me to the World League where I got to live there. Coming from New York City, I really fell in love with London. The first year I lived out in Bushey and I’m going to give a little pub a shout-out, my favourite pub, The Red Lion in Bushey. We played darts almost every night. For an American I can throw some darts!

“I’m excited. I have good friends out there – the head medical doctor at Wembley Stadium is a very close friend of mine. I want to give him props for sneaking me in via ambulance to The Freddie Mercury Tribute Concert (below), which is probably the greatest concert I’ve ever been to. I love the people in London. I’m from New York City but I say London’s my favourite city – outside of Jacksonville right now!”

Can you believe the growth of the game from that time to now, when we have four regular-season games in London?

“I don’t want to say I saw that coming because I just don’t think of it that way. When I was in London, to see the fanbase we had with the Monarchs (above), to see the people of London embrace our team… I remember our World Bowl, how excited everyone was, the after party we had, hanging out with the Moody Blues.

There has been talk of a developmental league returning in the States. As someone who went through that as a player in the World League, do you believe it would be beneficial for players you are coaching?

“I always appreciated that but those decisions are out of my realm. There are players who have come out of a training-type league, or a farm-type system. You can look around the world and most major sports have that. You see that with the clubs in the UK, in America you see it with the MLB. In the NFL you have college football but anything to better the sport I’m for. But, again, that’s a decision that’s way, way over my head.”

What happens now in the off-season for you?

“I think right now we’re in the process of getting the best staff we can for our team. I’m concentrated on that. Dave Caldwell has been working on that. Normally the process of what happens is after a season’s over we look at ourselves and write reports. Right now we’re trying to get coaches in, they’ll look at our team, write reports and all of those things will be discussed in the future.”

Do you see London one day having an NFL franchise?

“I really can’t answer that question – I can’t say yes or no. I can just say I love the game, I know the people in London love it, I’ve seen it grow. I was there with the Saints when we played the Chargers over there (in 2008). I’ve been out there twice with Jacksonville, it’s a sport that’s growing. Where it grows to? I can’t say where it stops. It’s an exciting, competitive sport, just like many out there. When you have that and people appreciate it, it has that opportunity to grow.”

We saw during your time as interim head coach that your offence was very exciting. Can we expect more of that?

“We want to be an attacking-style team. We want to attack on offence, defence, special teams, we like to push the ball down the field schematically. Basically it starts with being in great shape, physical, tough – mentally and physically – make sure you’re disciplined so you can be an efficient football team. Those are the things we’re looking to do moving forward.”

You have a three-year contract – what’s the mission statement?

“I don’t know about the contract, I let others handle that. We’re in a high-performance, result-orientated business and the business is winning, period. I’ve always believed that. Every single day that I come into this office, I am doing everything I can to make sure we win. I don’t look at it year to year, week to week, I look at my job more day to day.

“When you have a position like this and I wake up in the morning, I think about what I am going to do to make myself better so that I can better the organisation. I don’t look at things like X amount of years on a contract. I’ve been fortunate enough to be a head coach at two places where we turned it around, to me it’s never a rebuilding process, I don’t talk about that. We’re starting to create the foundation, moving forward and obviously the goal is to win.”