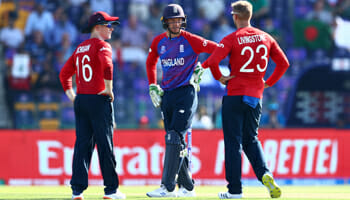 England and Australia have both claimed a couple of victories at the T20 World Cup ahead of their heavyweight clash in Dubai.

However, the feeling is that the Three Lions have been more impressive and have the better long-term form in this sphere, winning seven of their last eight contests.

Eoin Morgan’s side are backed to justify favouritism at 8/13 in our first England vs Australia prediction.

England’s bowlers have been superb so far at this tournament, starting out by dismissing the West Indies for just 55.

Bangladesh battled to a more respectable 124 for nine but Jason Roy’s rapid 61 helped the Three Lions to cruise home with almost six overs to spare.

Morgan is braced for a tougher test here, stating: “It’s probably going to be one of our most difficult games. Australia are a very strong side and have started well.

“Coming into the tournament, they would probably be considered joint-second favourites, along with us. They’re a side that we know pretty well, we’ve played against them a lot over a number of years.”

Dawid Malan did well when England prevailed 2-1 in a three-match Southampton series last September, posting knocks of 66, 42 and 21.

His steadying influence may come to the fore here and the Yorkshire ace appeals at England vs Australia odds.

Australia restricted South Africa to 118 for nine and picked off that total with two balls to spare to oblige by five wickets.

Sri Lanka did then set a decent target of 154 for six, with Marcus Stoinis and Glenn Maxwell conceding an eyewatering 51 runs from a combined four overs as they shared the fifth bowler’s spot.

However, David Warner’s 62 inspired a seven-wicket success off just 17 overs and vice-captain Pat Cummins is now looking forward to this challenge.

“It’s always huge,” he declared. “We play England a lot and I think the style of play is quite similar, we like to take the game on.

“They’ve been just about the form team in the last few years in white-ball cricket.

“It’s a huge game, we know these guys really well, we know it’s such a big game in the context of making those semi-finals.”

Australia came into this tournament having lost nine of their 11 most recent T20 internationals, albeit for most of those matches they were without several of their regulars.

Warner, who was left out by Sunrisers Hyderabad towards the end of the Indian Premier League, was on a poor run of scores prior to Thursday, when he survived a shocking dropped catch by keeper Kusal Perera in the fifth over.

Let’s finish off our England vs Australia betting tips by taking 17/20 for the first Aussie wicket to fall for under 22.5 runs.