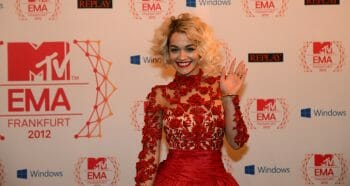 Due to the musical presumption that new can never be better, Rita Ora’s arrival on the X Factor judging panel has been harshly treated as the “Adam Bogdan to Liverpool” of TV talent show transfers.

Complaints include that her mainstream music career is a mere three years old, that she flopped on barely-watched BBC alternative The Voice by delivering no finalists, and – most unfairly of all – that she hasn’t achieved anything of note in the industry.

However, the news.bwin editorial team adopt the revolutionary policy of actually listening to modern pop music rather than mutely dismissing it all as eardrum pollution, so we were dubious of the criticism and decided to put the ropey “Rita’s rubbish” theory to the test.

Our approach was simple: take the eight past or present X Factor judges that were recording artists (so disregard Simon Cowell, Louis Walsh, Sharon Osbourne and newbie Nick Grimshaw) and rank them based on what percentage of their UK singles as a soloist went to number one.

Would you believe it, the results show that Ora not only deserves her chance to follow in the butt imprints of Gary Barlow, Mel B and co, she is in fact statistically more credible than the lot of them:

A superlative three of the 24-year-old’s five released solo hits soared to the top of the charts, and that’s without even counting breakout hip-shaker Hot Right Now, in which she did the vocal heavy lifting but allowed DJ Fresh the glory, or her contribution to the Band Aid 30 effort.

Cheryl Fernandez-Versini might be outshone by her new panel frenemy, yet she sits second, a whole 23% clear of Barlow thanks to an impressive five chart-toppers from ten attempts since the tragic demise of Girls Aloud, who inexplicably celebrated just four from 24 as a unit.

If chart success was determined by how many “I”s you have in your name, Dannii Minogue would be X Factor’s brightest-shining star. Sadly, by our more scientific song-shifting metrics, 20 singles and no number ones leaves her at the bottom of the class.

We focussed on solo figures due to the attitude that it is the most accurate means of measuring the individual’s appeal. If you disagree with this outlook, below are the eight’s strike rates when adding both singles as part of a group and as a featured artist into the equation. Again, Ora scores high:

Ora is 11/4 to be the winning X Factor judge, a price that becomes even more enticing when you consider the beginner’s luck that saw Minogue, Fernandez-Versini, Contostavlos and Scherzinger all triumph in their first series.