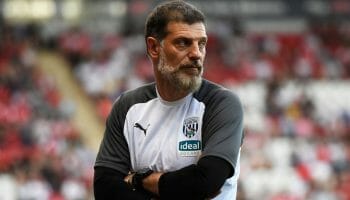 West Brom can clinch automatic promotion to the Premier League if beating QPR at The Hawthorns and it will be a big surprise if they fluff their lines.

The Baggies have prevailed in their last three encounters with the Hoops, including a 7-1 romp when they met at this venue early on last season.

As Rangers have nothing at stake, this should be another emphatic success and 7/4 for Albion to win by more than two clear goals is our first West Brom vs QPR prediction.

West Brom looked to have blown it when following up draws against Blackburn and Fulham by losing 2-1 at Huddersfield on Friday.

However, Brentford missed the chance to go above them when beaten at Stoke the following day and Albion should now make the most of that reprieve.

Slaven Bilic sounded a rallying cry after his side’s setback, stating: “We have to fight, to show we are proper men, a proper team and proper characters. Or are we only good in a good time?”

The big difference here could be that whereas Huddersfield were fighting for survival, QPR are consigned to a comfortable mid-table finish whatever happens.

That should allow the Baggies to be on the front foot throughout and 75 goals scored this season suggests they can capitalise if creating enough chances.

Looking at the 3/2 for Albion to win both halves is another strong option.

QPR can be content with a fair campaign and have effectively been safe since a six-match unbeaten run prior to lockdown.

However, they lost five of their first six matches after the restart and even Saturday’s 4-3 triumph over Millwall hinted at a team already planning for summer holidays.

“We could have scored eight, nine or 10 goals there,” said Mark Warburton. “We’ve missed a couple of great chances, their keeper’s produced a couple of world-class saves and we’ve hit the bar.

“We looked really dangerous going forward. We knew they had to throw bodies forward and we could transition on them really quickly.”

Rangers, who recently lost 3-0 at home to Sheffield Wednesday, were ragged at the other end, though, and only Luton and Hull have conceded more times than them this term.

It’s worth noting that seven of the 10 away goals let in by QPR against the current top six came in the first half.

That makes 39/20 for more goals to be scored in the opening period here than the second worth adding to our West Brom vs QPR betting tips.

For those seeking a bigger pay-out, 15/1 for a 4-1 home victory catches the eye.