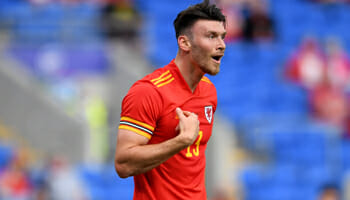 Following on from their incredible run to the semi-finals five years ago, we’re taking a look at the best Wales Euro 2020 odds.

The Dragons, who still have a sprinkling of star names and a strong work ethic, can be backed at 150/1 to now lift their first major trophy.

Only England and Group A rivals Turkey have younger squads but interim boss Robert Page is hopeful of more success.

“I have a great group and a very good mix,” he said. “The older ones have got great character, temperament and personality.

“But we’ve got young, ambitious and hungry players coming into the squad that want their jerseys. Nobody can rest on what they’ve done before.

“There’s a good blend and on top of that they’re good characters.

“I liken it to a club environment and that is hard to achieve when you’ve only got them for sporadic moments throughout the year.”

Which round will Wales reach?

With Italy and Switzerland also in their pool, Wales are 9/1 to top the table and 4/5 to qualify for the knockout stages.

Punters can get 80/1 for the Dragons to win all three of their matches in that section, 25/1 they pick up seven points and 10/1 for six.

The Dragons can be backed at 4/1 to reach the quarter-finals, 12/1 to match their Euro 2016 exploits and make the semis and 50/1 to go one better by qualifying for the final.

Gareth Bale is the country’s all-time record goalscorer with 33 strikes from 92 caps and he is 33/20 to be their leading marksman this summer.

The 31-year-old certainly finished off a loan spell at Tottenham in fine form, netting six times in as many Premier League matches.

Liverpool midfielder Harry Wilson did well for Cardiff last term and is 4/1 for this market, with Kieffer Moore 8/1 after bagging 20 Championship goals for the Bluebirds.

Manchester United winger Dan James and Juventus star Aaron Ramsey are available at 12/1, although it is the same price for no Wales goalscorer.

Optimistic supporters can get 50/1 for Bale to be named UEFA player of the tournament.

The Dragons did not feature in any penalty shoot-outs five years ago but are 6/1 to have a tie decided by spot-kicks this time.

With some fierce battles on the cards in Group A, it is 7/2 for Wales to receive at least one red card!