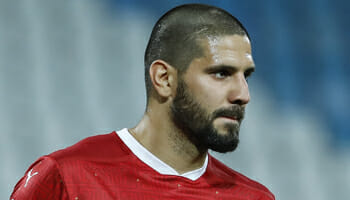 Ireland’s World Cup qualification hopes look in tatters and they have never beaten Group A leaders Serbia in six meetings.

However, we still believe the men in green have been playing better than their bare results suggest and do have a big performance in them.

A win here would ease the pressure on Stephen Kenny and 23/10 for that to happen is our first Republic of Ireland vs Serbia prediction.

Ireland began their campaign with a brave 3-2 defeat against Serbia in Belgrade prior to a frustrating 1-0 loss versus Luxembourg in Dublin.

Kenny’s side were then left wondering what might have been when outplaying Portugal for long periods and leading through John Egan’s header on the stroke of half-time.

Unfortunately, Cristiano Ronaldo was in the mood to make more history and nodded in a late double to set a new record for international goals.

Sadly, Ireland couldn’t replicate that form when needing a late Shane Duffy equaliser to snatch a 1-1 home draw with Azerbaijan, ranked 112th in the world.

As a result, they sit second bottom in the table at the halfway stage, nine points adrift of joint leaders Portugal and Serbia and without a competitive win in 15 attempts.

However, Kenny remained defiant, declaring: “A lot of the recent performances have been very, very good, but we’ve got to turn performances into results.

“Again, against Azerbaijan, we played a lot of good football and created a lot of chances; if we win 2-1, we’re having a different conversation, so we’re kicking ourselves that we haven’t won that game.”

It does, admittedly, require a leap of faith to stick with Ireland, but we agree with Kenny that they are capable of coming good.

Looking at the 23/4 for a home win and both teams to score.

Fulham forward Aleksandar Mitrovic bagged a brace when Serbia edged out Ireland in Belgrade and hit another double in Saturday’s 4-1 success versus Luxembourg.

In between, he netted as the Eagles came from 2-0 down to draw with Portugal and grabbed both goals in a 2-1 win over Azerbaijan in Baku.

Mitrovic is also at the top of the Championship Golden Boot table with four strikes for the Cottagers, so is clearly the danger man in Dublin.

Serbia can blow hot and cold, though, and they were lucky to draw with Scotland in a Euro 2020 play-off before bowing out on penalties.

Covid issues have cost them the services of Aleksandar Kolarov and Crystal Palace midfielder Luka Milivojevic.

There is also a chance that playing three quick matches this early in the season will take a toll.

Let’s go all in on a home win and add 11/1 for a 2-1 scoreline to our Republic of Ireland vs Serbia betting tips.