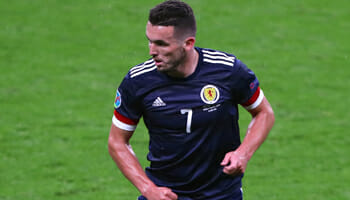 Ukraine have already broken Scotland’s hearts once this year but we’re hoping lightning doesn’t strike twice when they clash in Poland.

The Blue and Yellow won June’s World Cup play-off and can still pip Steve Clarke’s side to top spot in Nations League Group B1 with a victory here.

Both teams have been hit by some key injuries, but we reckon it will be the Tartan Army celebrating promotion in Krakow.

They only need a draw to go up and 9/4 for that outcome is our opening Ukraine vs Scotland prediction.

Ukraine got off to a flying start in this pool when winning 1-0 in Ireland and then brushing aside Armenia 3-0 in Lodz.

However, they were held to a 1-1 draw by the Irish in the summer’s final round of fixtures and were then thumped 3-0 in Scotland last week.

Saturday’s 5-0 thrashing of Armenia kept Oleksandr Petrakov’s men within striking distance of the Scots, but that match featured some hapless defending by the hosts.

This is a much tougher test and Ukraine are down to the bare bones of their squad following a series of injury setbacks.

Andriy Yarmolenko and Roman Yaremchuk can still provide plenty of experience, but some of the supporting cast are having to grow up fast.

Scotland boss Clarke must also cope without several of his better players, particularly at the back.

However, despite Scott McTominay being suspended, John McGinn and Callum McGregor can help to hold things together in midfield.

So far, Scotland have suffered just one blip in this pool, going down 3-0 to Ireland in Dublin in June.

Clarke’s men avenged that defeat when coming from behind to win 2-1 at Hampden Park on Saturday.

Ryan Christie scored the decider from the spot in the 80th minute after Jack Hendry’s header had cancelled out John Egan’s first-half opener.

“The summer we had was frustrating – we were desperate to go to a World Cup,” said Bournemouth midfielder Christie.

The Scots never seem to do anything the easy way, though, so 13/1 for them to be trailing at half-time and then draw completes our Ukraine vs Scotland betting tips.