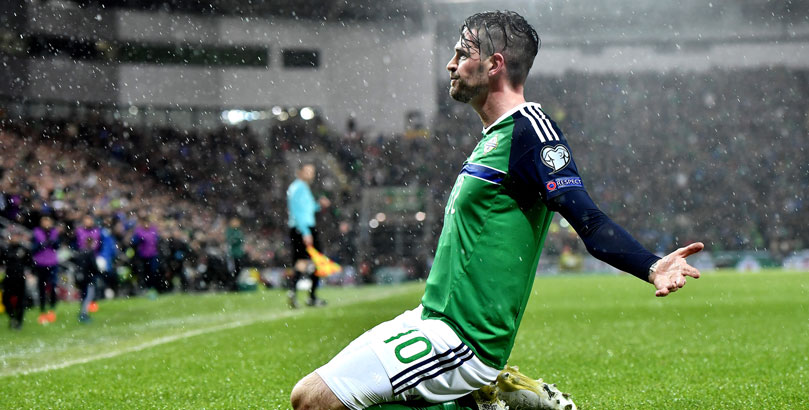 Northern Ireland have given themselves a great chance of qualifying for next year’s World Cup finals and will be determined to avoid any silly slip-ups against San Marino in Serravalle on Friday.

Michael O’Neill’s side trail only runaway leaders Germany in Group C and are four points clear of the third-placed Czech Republic, with just four rounds of fixtures left to play.

Monday’s home clash with the Czechs could be a distraction here but we’re taking 87/100 for a 1-0, 2-0 or 3-0 away win in our San Marino vs Northern Ireland betting predictions.

San Marino have conceded 30 goals in six straight World Cup defeats after going down 8-0 and 7-0 to Germany either side of a 6-0 loss to the Czech Republic.

The international whipping boys did manage to score their only goal so far in this pool when beaten 4-1 in Norway last October, with Mattia Stefanelli capitalising on some sloppy defending.

However, they then faded to let in three goals in the final 15 minutes of that match, having previously suffered a similar late collapse in a 4-0 Belfast defeat.

Looking at the San Marino vs Northern Ireland odds, those stats make 4/5 for the visitors to score between 75:01 minutes and full-time look a gift.

Northern Ireland enjoyed a taste of tournament football at Euro 2016 and clearly want to build on that by reaching Russia 2018.

Three straight wins, with seven goals scored and none conceded, have put them in pole position to make the play-offs behind Germany, who are the only team to have netted against the men in green in this group.

Ahead of this game, O’Neill said: “We’ve looked at how teams have not played as smartly as they could have and maybe underestimated San Marino. That’s something we’ve hammered home to the players.

“The one thing you always want to avoid is complacency in this type of game and the way to do that is to point out the mistakes you’ve made, your potential weaknesses and to make sure on the night we play as if we’re playing Germany or the Czech Republic.

“Having seen the players this week, that’s what we anticipate for the type of performance we’ll get.”

O’Neill’s side have only managed one goal themselves in three away fixtures, though, so we’re not expecting the floodgates to open in Serravalle.

Ireland are without West Brom centre-half Gareth McAuley and Watford defender Craig Cathcart, prompting the need for a safety-first approach to grinding out a victory here.

It may be tight for a while but we reckon 18/5 for a 2-0 triumph is the way to go in our San Marino vs Northern Ireland betting tips.