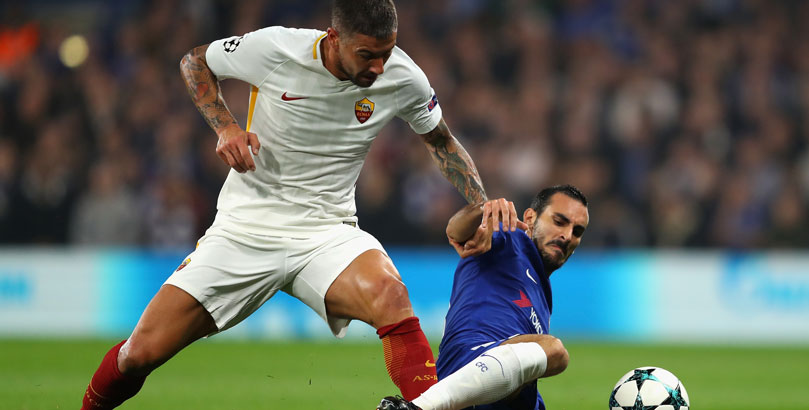 We’ve crunched the numbers for every defensive player in the big five European leagues in the last three seasons – filtering out those who commit fewer than one foul per game on average, along with those who have made less than a season’s worth of appearances since the start of 2015/16 – to find out who are the referees’ pets and who often find themselves in the naughty corner.

One of the most surprising statistics when you compare the top five European leagues is how few cards get dished out in the Premier League. Despite its reputation as a physical division, it sees the fewest cautions per match and the lowest average number of fouls by quite some distance. This makes it all the more impressive that so many of the players adept at getting away with fouls hail from overseas. New Chelsea signing Davide Zappacosta leads the way here, having committed an average of 14 fouls for each card he’s received in the last three seasons, with Liverpool’s Joel Matip the only other player in double figures.

It’s no surprise to see Watford’s Miguel Britos among the five players punished most often after his crunching tackle on Anthony Knockaert earlier this season, but Arsenal’s Shkrodan Mustafi is the most penalised of all, earning a card for every three fouls committed on average. He could learn from Gunners team-mate Sead Kolasinac, who has managed to commit almost three times as many offences for each time his name’s gone into the book.

Bilbao’s Eneko Boveda is the least-punished fouler in the Spanish top flight with a slightly better record than Zappacosta. This is rendered all the more impressive by how card-happy LaLiga referees are, with an average of over five cards per game compared to around three-and-a-half in the Premier League.

In the Bundesliga, the value of experience is clear, with Dortmund captain Marcel Schmelzer and Schalke’s veteran Brazilian defender Naldo among the five least punished players. In Serie A, the two Milan clubs each employ one of the two least-cautioned defenders in Danilo D’Ambrosio and Ricard Rodriguez, although the former’s Inter team-mate Andrew Ranocchia is clearly not taking much notice, ranking as one of the division’s five most-penalised players.

However the master of avoiding punishment across Europe’s big five leagues in the last three seasons has been Ludovic Baal of Rennes in Ligue 1, with a whopping 16.8 fouls committed per card received.

While there are clear differences between leagues in the way the game is officiated, the referee also plays a huge part in how many cards are shown. In the Premier League, a cunning player will get away with a lot more in front of Lee Probert, who only shows a card once every 9.7 fouls on average, than when Andre Marriner is running the show. Marriner sees an average of over four fewer fouls before reaching for his pocket, although that’s positively lax by LaLiga standards where the strictest official takes names.