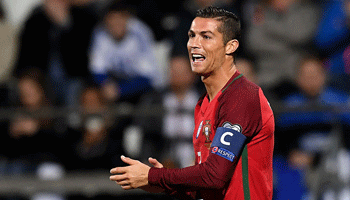 Portugal and Hungary played out a thrilling 3-3 draw during Euro 2016 and we’re hoping the goals will again flow when they meet in a World Cup qualifier in Lisbon on Saturday.

Fernando Santos’ side had to come from behind three times in France last summer, with Nani netting their first strike and then Cristiano Ronaldo bagging a double, with that result allowing them to scrape through to the knockout stages before going on to lift the trophy.

This weekend’s Portugal vs Hungary odds include 4/5 for over 2.5 goals in the game and that looks a gift to us.

Portugal started Euro 2016 slowly and it was the same in their current World Cup qualifying campaign as an opening 2-0 defeat in Switzerland raised questions about whether they were going to rest on the laurels of a first major tournament triumph.

However, their fans needn’t have worried as the Selecao have since got back on track with three straight big wins, beating Andorra and the Faroe Islands 6-0 before brushing aside Latvia 4-1 in Faro last November.

Ronaldo may have been injured early on in the extra-time win over France in the Euro 2016 decider but he has reminded everyone of just how important he is to his national team by netting seven times in that trio of Group B victories.

Portugal appeal at 29/20 to score at least three times against Hungary.

A Look At Hungary’s Betting Odds

Hungary rekindled memories of the great Ferenc Puskas days when topping their pool at Euro 2016 but they suffered a dramatic reality check when crushed 4-0 by Belgium in the first knockout round.

There appeared to be a hangover from that embarrassing exit when they began their World Cup qualifying campaign by only drawing 0-0 with the Faroe Islands and then losing 3-2 at home to Switzerland.

However, a 2-0 triumph in Latvia and 4-0 home win over Andorra steadied the ship, with Hoffenheim striker Adam Szalai netting four times in the last three matches.

Hungary have shown enough to suggest they could grab a goal in Lisbon, so let’s try a correct score of 3-1 to Portugal at 11/1.