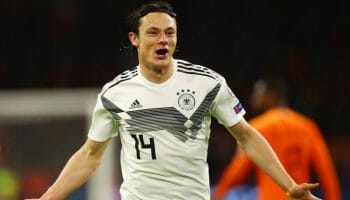 Bitter rivals Germany and Netherlands are set for another blockbuster battle in Hamburg but we just favour the hosts in this Euro 2020 qualifier.

Die Mannschaft have already defeated the Dutch 3-2 in Amsterdam in Group C and that should allow them to play with more freedom here.

Punters can get 19/20 for Joachim Low’s side to prevail and that is our initial Germany vs Netherlands prediction.

Germany embarked on a rebuilding process after flopping at last year’s World Cup and that contributed towards another poor showing in the Nations League.

However, Low now looks to have found a nice blend of youth and experience after kicking off this campaign with three straight victories.

Nico Schulz grabbed a last-gasp winner in Holland and Die Mannschaft built on that by obliging 2-0 in Belarus and then thrashing Estonia 8-0 on home turf.

An inexperienced defence is still a slight concern, but Germany have the talent to dominate in midfield through the likes of Joshua Kimmich, Ilkay Gundogan, Toni Kroos and Leon Goretzka.

Marco Reus, Serge Gnabry and Julian Brandt can provide creative flair going forward, while Timo Werner is a reliable striker who has already hit the ground running for RB Leipzig this term.

Recent encounters between these teams have been quite open, so Germany vs Netherlands odds.

Ronald Koeman has re-established Netherlands as a major force and they performed with credit in the Nations League finals after advancing ahead of Germany and France.

Holland came from behind to beat England 3-1 in extra-time in the semis, before Portugal made home advantage count when taking the decider 1-0.

Ryan Babel, Memphis Depay, Quincy Promes and Luuk de Jong can cause problems for any defence, so this is not a team to take lightly.

However, we just fear they could be overrun in the engine room, despite the presence of Frenkie de Jong and Georginio Wijnaldum.

Let’s finish off our Germany vs Netherlands betting tips by taking 8/1 for a 2-1 home win.