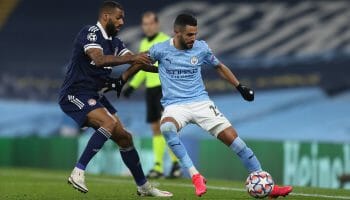 A trip to Greece offers Manchester City the chance to forget about their domestic problems and secure their place in the last 16 of the Champions League.

City’s poor form in the Premier League has been in contrast to the European competition, with Pep Guardiola’s men winning all three matches by an aggregate score of 9-1.

They were 3-0 winners when these teams met earlier this month, which gave us a clean sweep of three correct tips including the correct score at 29/4, and another victory by more than one goal at 9/10 is our opening Olympiacos vs Man City prediction.

Olympiacos made an encouraging start to the group stage of the Champions League when they nicked a stoppage-time winner at home to Marseille but that has proved to be their only goal so far.

A 2-0 defeat followed against Porto before a 3-0 loss at the Etihad Stadium, when Ferran Torres gave City a 10th-minute lead.

To be fair to Olympiacos, they were then in the ascendancy before late goals from fit-again Gabriel Jesus and Joao Cancelo wrapped up the win for City.

Olympiacos coach Pedro Martins felt his side pushed City well but paid the price for a poor first-half display.

He said: “We let City dominate the first half and we gave them a lot of space. It is something we have to address.

“We showed in the second half we could be a lot better. We improved our performance.”

We expect the hosts to prove harder to break down in the first half this time so a draw at half-time before City go on to win appeals at Olympiacos vs Man City odds.

City’s poor start in the Premier League continued at the weekend as they slipped to a 2-0 defeat at Tottenham.

City have scored only 10 goals in eight league game but Sergio Aguero was an unused substitute as he works his way back to fitness while Gabriel Jesus, the usual deputy in his absence, has played just four times due to a quad issue.

“We have scored in two seasons more than 100 goals and 90 per cent of the players are the same, especially up front.

“Football is like this. Sometime one season is completely different to the other one and you have to find the moment and we will find this little way to play. We are going to get better.”

City are far from their best but should still be too strong here and a 2-0 win at 25/4 is our final Olympiacos vs Man City prediction.