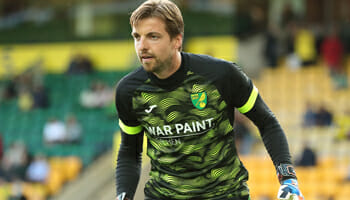 Norwich enjoyed a welcome boost when hitting Bournemouth for six in the EFL Cup and are fancied to be competitive against Leicester.

The Canaries had to endure a tough return to the Premier League when beaten by Liverpool and Manchester City but their heads won’t have dropped.

With the Foxes coming off a heavy defeat at West Ham, we like 19/20 for the home team not to lose as our first Norwich vs Leicester prediction.

Daniel Farke refused to get carried away with Tuesday’s big win over the Cherries, when both teams made wholesale changes.

However, it was nice to see summer signings Christos Tzolis and Josh Sargent both scoring twice while Kenny McLean and Lukas Rupp also netted.

“It is very important to stay balanced,” said Farke. “A win like this is always good for confidence and we are in the next round, that is the main thing.

“But we are not over the moon just because we have won this game, just like we were not too downhearted after losing to two of the best teams in the world in the Premier League.

“I was just pleased with the performance, we were rock solid in defence, unbelievably good in our transition play and were very clinical in front of goal.”

Norwich struggled to make an impression when hammered 5-0 at Manchester City, but they did create some early chances before going down 3-0 to Liverpool at this venue.

Looking at the 31/20 for the Canaries to score first here is fair value.

Norwich midfielder Przemyslaw Placheta, who has yet to feature this season, is still struggling with Covid-19 symptoms.

Defender Bali Mumba is sidelined by a dislocated kneecap and Greek midfielder Christos Tzolis (calf) is a doubt, but forward Josh Sargent could be available after a minor glute problem.

Leicester kicked off their league campaign by edging out Wolves 1-0 but must now recover from a 4-1 defeat at West Ham.

The Foxes showed good spirit to pull a goal back through Youri Tielemans when 2-0 behind and down to 10 men after a red card for Ayoze Perez.

“Obviously, the red card made it difficult, but we have to accept we made mistakes and got punished.”

Perez is now suspended and the Foxes were also without £15million defender Jannik Vestergaard after he picked up an injury in training.

Jonny Evans, Wesley Fofana, James Justin and Ryan Bertrand were already missing at the back.

That injury list leaves the visitors vulnerable and 18/5 for a home win is tempting enough to be added to our Norwich vs Leicester betting tips.

Bertrand could make his league debut after recovering from Covid but Vestergaard and Evans remain injured.