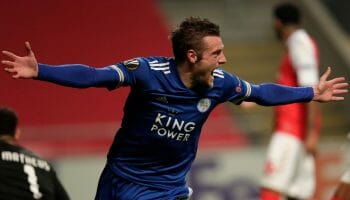 Leicester now have an FA Cup final to look forward to but first will be focused on boosting their Premier League top-four hopes by beating West Brom.

Albion have given their fans hope of a great escape from relegation with back-to-back wins but may now face a reality check at King Power Stadium.

We like 13/5 for a home win and both teams to score for our first Leicester vs West Brom prediction.

Leicester recovered from losing to Manchester City and West Ham in this competition when edging out Southampton in Sunday’s cup semi.

Kelechi Iheanacho gave us a 4/1 first scorer pay-out when netting the only goal of the game, taking his superb recent tally to 10 in seven matches.

Jamie Vardy has taken a backseat in terms of being the star man but did all of the donkey work when helping to set up that strike.

On Iheanacho’s hot streak, Brendan Rodgers told the club website: “He’ll play better in the game. His touch got away from him too many times.

“Maybe before when that would have happened, it would have affected his confidence, but now he’s at a level where he is able to let those mistakes go.

“Now, he can just get on his game, and what he’s shown is that outside the box and inside the box, he’s there to score goals.

“Him and Jamie, the combination, was a real, real threat. They were both exceptional for us.”

Vardy has now gone 11 games without a goal, but he does have a great record against West Brom, scoring six times in the last eight renewals of this fixture.

Looking at the 10/3 second favourite to break the deadlock.

West Brom are still as short as 1/50 to be relegated but certainly seem determined to go down in a blaze of glory.

Albion followed up a bizarre 5-2 thrashing of Chelsea at Stamford Bridge by crushing Southampton 3-0 on home turf.

Matt Phillips added to Matheus Pereira’s penalty against Saints before Callum Robinson settled the game in the second half at The Hawthorns.

“We have to believe we can do it and there’s no lack of belief in the changing room,” winger Phillips told the club’s official site.

“The players and the management staff have got to keep doing what we’re doing, keep working hard and take the confidence into our next game.

“I think we thoroughly deserved the three points. We played some brilliant football against a very good Southampton side and on another day, we could have scored plenty more.

“We have to keep focusing on ourselves and ignore what’s going on around us. I think everything has been falling into place for us recently as a team.”

Sam Allardyce is a past master at pulling off impossible-looking survival acts, but surely even this mission is beyond him.

Let’s finish off our Leicester vs West Brom betting tips by taking 10/3 for the Foxes to oblige 2-1, 3-1 or 4-1 from the multiple correct score market.