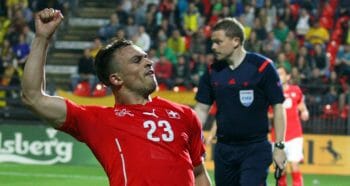 * Should the Swiss international shake off a hamstring injury he looks good for a goal, having scored twice in his past 90 minutes of football

Mark Hughes clearly has a talisman in Jack Butland, whose late-March injury seemed to cause a Potters collapse at the end of last term, with Stoke carrying poor form into the first month or so of the new campaign in the England goalkeeper’s continued absence.

However, midfielder Xherdan Shaqiri appears to have taken over the role of Hughes’ MVP, with Stoke unbeaten in six Premier League matches the silky Swiss has started this term, and taking just one point from the other five.

It’s unclear whether the 25-year-old has recovered from injury in time to make the XI, and Stoke took three games to secure a victory when Shaqiri last returned from injury, so 23/20 about the hosts seems short.

Two losses in a row against north-east strugglers Middlesbrough and Sunderland have seen the Cherries slip a point behind their hosts in 13th, but Eddie Howe’s side had lost just one of their previous seven Premier League fixtures, and that was away to 9/4 title favourites Manchester City.

If Callum Wilson and Andrew Surman shake off minor injuries, Howe will have practically a full complement of players available and fresh after resting during the international break.

They’re 12/5 to win on the road, with Bournemouth 67/100 to avoid defeat in the double-chance betting.