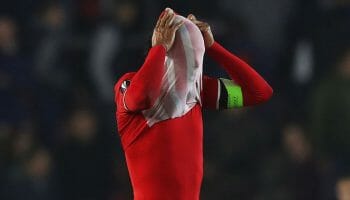 Southampton and Bournemouth have both been in good form of late but the value could lie with the visitors in this Premier League south-coast derby.

The Cherries looked in danger of being dragged into a relegation battle at the start of the month, but an away draw at Manchester United and two home wins should allow them to play with confidence here.

The pick of the Southampton vs Bournemouth odds in our book is 6/5 for the visitors to win or draw.

Trueform tips: Bournemouth are clearly on an upward curve and could be worth sticking with, even though the Saints also scaled the heights a couple of times before the international break.

Southampton played some great football when winning 4-0 at Sunderland and 4-3 at Watford either side of an unlucky EFL Cup final loss and they again gave a good account of themselves when going down 2-1 at Tottenham last time out.

England call-ups for Ryan Bertrand, James Ward-Prowse and Nathan Redmond were testimony to how well Saints have continued to develop players, despite being constantly raided in transfer windows over the last couple of years.

Claude Puel’s side last failed to score in a league match back in mid-January and 7/10 for both teams to hit the back of the net looks a safe bet ahead of what is expected to be an end-to-end contest.

Bournemouth clearly took great confidence from hanging on for a point at Old Trafford as they followed up that heroic effort with an entertaining 3-2 win over West Ham and then a more measured 2-0 triumph against Swansea.

That improvement came after a worrying run of just two points out of 21 from the turn of the year onwards and defender Steve Cook said: “We’ve come through that tough period, which was worrying. But we’re a strong group and we’ve stuck together and we’ve ground out three great results.”

The Cherries face Liverpool, Chelsea and Tottenham after this, so we’re taking them to go all out for a positive result at St Mary’s Stadium.

Odds of 15/1 for Bournemouth to win 2-1 are worth a speculative wager.