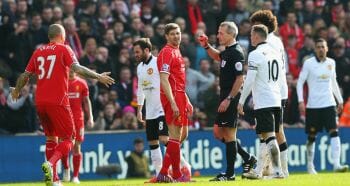 One of the more widely trumpeted revelations from former Liverpool captain Steven Gerrard’s new book ‘My Story’ is his dislike of two footballing figures.

Stuart Pearce gained Gerrard’s ire for not giving him the England captaincy during a caretaker spell in charge of the national team.

Yet, a special place in the Anfield legend’s disaffections was reserved for referee Martin Atkinson, about whom he is less than complimentary throughout the piece.

Prior to the last match in which Atkinson officiated Gerrard’s Liverpool, he finally admits, “I can’t stand him.”

Research conducted by news.bwin.com into the Premier League big six and their win percentages in matches involving still active referees over the last five years suggests the Los Angeles émigré had good reason to dislike the Bradford-born ref.

Liverpool have been least successful under Neil Swarbrick during the period under examination, winning just 28.57% of the matches in which he policed proceedings.

However Swarbrick has overseen just seven matches involving the club over the last five years.

The Reds have their second lowest win percentage under none other than Atkinson, failing to claim three points in ten of the 16 of their fixtures (37.5%) he has overseen since the beginning of the 2011/12 campaign.

During Gerrard’s last campaign in English football Liverpool won a mere one of the five games in which his most hated man in black held the notebook.

This weekend the 35-year-old is sure to have at least one eye on the Merseyside derby, where Liverpool are fractional outsiders for victory at 7/4, with their hosts 17/10 and the draw 11/5.

When he lays it upon the man tasked with maintaining order at Goodison Park a grim smirk of disdain is likely to creep across his celebrated visage.

Atkinson will be the man in charge, making the odds on a rare Toffees victory in the fixture, or the draw, all the more alluring.