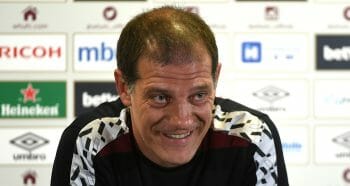 He may not be the high-profile striker West Ham fans were hoping for so close to the transfer deadline, but former Boca Juniors forward Jonathan Calleri is an exciting acquisition nonetheless.

Calleri has been rumoured with a move to Europe ever since his remarkable “rabona” goal for Boca Juniors in July 2015 went viral. The strike, which lobbed the opposition goalkeeper and upstaged his strike-partner Carlos Tevez’s debut, sparked rumours of a move to Stoke City or Chelsea.

This summer, the Hammers reportedly fought off Sevilla and Barcelona to bring the 22-year-old in on loan from South America.

Slaven Bilic has been searching for a low-cost solution to his lack of versatility in the final third, and he may have just found the perfect young player.

Calleri scored 15 goals for Boca last season alongside Tevez before moving on a six-month loan to Sao Paulo in January despite strong interest from Inter Milan. He adapted quickly to life in Brazil, scoring nine goals in 12 Copa Libertadores games and a further three in five league matches.

The Argentina under-23 international seemed destined to leave South American football this summer despite his nation’s disappointing performance at the Rio Olympics. Calleri led the line in all three of their matches, but scored only once against Honduras as Argentina fell at the first hurdle.

The Premier League looks like the perfect destination. It will almost certainly take a few months for Calleri to adapt to the speed and physicality of English football, but his playing style is well suited in the long run.

The 22-year-old is a very powerful footballer who dominates in the air, although he is quicker and more agile than Andy Carroll. Operating either as a central striker or on the wing, Calleri is likely to challenge Andre Ayew and Enner Valencia for a starting place.

Parallels are already being drawn with Tevez – another relatively unknown Argentine who made his name in East London – and although Calleri is taller at 5ft 10ins, his tireless work rate and combative playing style are reminiscent of West Ham’s former hero.

The last 12 months have seen Calleri refine his finishing, adding much needed composure in the penalty area at a time when his tricks and dribbling skills had threatened to overshadow his progress. The biggest concern for Bilic is whether or not he is too slight for the Premier League.

First team or one for the future?

Comparisons with the likes of Tevez and Gonzalo Higuain may be premature, but certainly Calleri’s career has progressed well to date. A move to one of England’s biggest clubs seems well timed.

His Premier League game time will be limited in the coming months as Calleri’s rough edges are smoothed, but a hectic European schedule means he will have the opportunity to make a mark between now and the end of the season.

West Ham are still in the market for a first-choice striker. Carlos Bacca remains the most likely option, although it is rumoured that the Hammers are unable to finance the deal until Bilic finds a buyer for Diafra Sakho.

West Ham are 11/4 to finish in the top six this season.