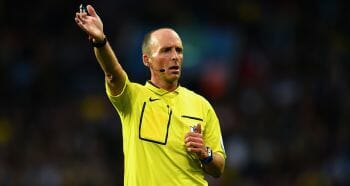 Mike Dean might expect his stock to be pretty low in the eyes of the footballing public after his game-altering oversight during Chelsea v Arsenal and he’d be right.

No Premier League referee has been subject to a more negative spread of twitter reaction over the last 30 days than the Wirral-based veteran of 370 top-flight games.

A sentiment survey by bwin found 56% of tweets on Dean’s officiating during the period in question were of a decidedly negative nature.

Being seen to allow Chelsea’s Diego Costa to continually goad Arsenal defenders Laurent Koscielny and Gabriel by means of assault and abuse until the latter finally snapped, ruining the game as a spectacle in the process, was bound to do that.

However, Dean (4/1 to brandish a red card in his next outing at West Ham v Norwich) was not alone atop the twitter dissent rankings over the past month, with Martin Atkinson also on the receiving end of lopsidedly negative reviews from the twitterati.

Cold-shouldering a Wayne Rooney penalty appeal late on during Manchester United’s 2-1 loss in Swansea will have done the Yorkshire official few favours.

Atkinson also provoked ire from armchair officiators when waving away Aston Villa spot-kick entreaties after the ball struck Saido Berahino’s arm mid-way through the first half of the second-city derby last weekend.

Weight of tweets clearly mark out Dean’s calls as the more controversial though, with the 47-year-old’s actions drawing an average 22,654.8 related posts an outing over the last 30 days to his fellow whistle-blower’s 102.3.

Fickle is the jury in the court of public opinion lest we forget, yet, at present both might well take a leaf or three from the notebook of Leicester-born ref Kevin Friend.

A relative rookie in comparison to the aforementioned duo having overseen 120 matches at the highest domestic level, Friend has earned by far the most positive twitter assessment during the period under examination.