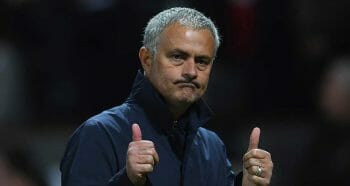 Manchester United’s centre-half crisis has become grave following news that Chris Smalling has broken his toe and is out until mid-December at the earliest alongside defensive partner Eric Bailly.

With little in the ranks beyond permanently-injured England man Phil Jones, having shed the likes of Jonny Evans, Michael Keane, Tyler Blackett and Paddy McNair over the past two years, the Red Devils are faced with a month of left-backs Daley Blind and Marcos Rojo in front of keeper David De Gea.

According to numerous reports, boss Jose Mourinho has identified the problem and is set to bring in bodies by next summer at the latest, with Atletico Madrid stalwart Diego Godin recently mentioned as a potential Old Trafford ‘leader’.

Benfica’s Victor Lindelof is at the opposite end of his career to the 30-year-old Uruguayan, turning out just 42 times for the senior side since signing in 2012, yet the 10-cap Sweden international is the latest name linked with a move to the north west.

Portuguese paper O Jogo believes the Primeira Liga champions will attempt to tie the 22-year-old down by offering him a contract with a £52m release clause, though with United, Chelsea and others reportedly interested in his services, Lindelof would be crazy to sign such a deal.

His defensive stats this term hardly set the world alight, with 0.9 tackles and 1.8 interceptions per match miles behind the top Premier League centre-half numbers of 3.3 from Manchester City’s Nicolas Otamendi and 3.5 from Sunderland’s Papy Djilobodji respectively.

However, Lindelof’s impressive 88.8 per cent pass-completion rate is up there with the division’s top stoppers, and with Benfica conceding just four times during the nine league matches the former Vasteras man has started this term, whether there has been much for him to do is questionable.

The fact that Lindelof can also play at right-back will likely be seen as a plus by Mourinho, although just two appearances there in 16 all told for Benfica this term suggests his best position is centre-half.

Man Utd are 8/5 to claim a Premier League top-four place this season.