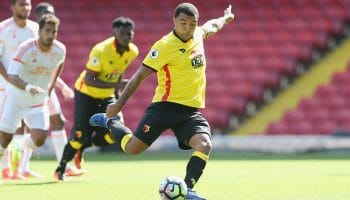 The top Premier League strikers will be raring to go after the international break and we’ve picked out four first goalscorer tips for this Saturday.

If all the selections break the deadlock in their respective matches, we’ll pick up a nice 580/1 pay-out and our EPL first goalscorer tips may also be worth putting in other multiple bets.

The Spain forward bagged the only goal of the game when the Blues won at Selhurst Park in mid-December and was also on the scoresheet when Chelsea prevailed 3-0 there last season. Costa goes into this weekend in fourth place in the Golden Boot chart, four behind leader Romelu Lukaku, and will be trying to close that gap after striking for his country against Israel last Friday.

Jamie Vardy for Leicester vs Stoke @ 9/2

The England striker will be keen to forget his last clash with Stoke, when getting sent off after just 28 minutes before the Foxes battled for a 2-2 draw. Vardy did hit the target in both meetings last term, though, and goes into this match in good heart, having bagged four in five games for Leicester before netting from off the bench in England’s defeat of Lithuania.

Dusan Tadic for Southampton vs Bournemouth @ 11/2

Fantasy football fans have been scrambling to pick up Tadic after a run of three assists and a goal in his last three Premier League fixtures and another strike for Serbia in their World Cup win at Georgia only emphasises his well-being. Taking over penalty duties from the injured Charlie Austin has added to Tadic’s appeal and he appears far more suited to the central role he has occupied in recent weeks.

Troy Deeney for Watford vs Sunderland @ 4/1

Deeney looked out of sorts for a few months over the winter, but he has performed much more like his old self since the turn of the year, scoring in five of his last seven Premier League appearances for the Hornets, including three opening strikes. The powerful front man struck from the spot when Watford entertained Sunderland last season and will be eyeing more success on Saturday.