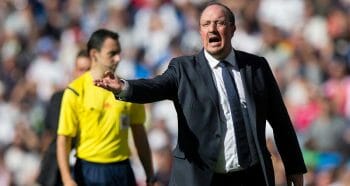 Chelsea manager Antonio is reportedly eyeing up Burnley’s Michael Keane and Middlesbrough’s Ben Gibson as he plans for life after the club’s long-time captain and centre-half John Terry.

The Italian is particularly keen on recruiting British talent with a view to remaining on the right side of Premier League homegrown player rules according to the Daily Mail.

Like Terry, Gibson is a one-club man, early career loan spells aside, while Keane came through the ranks at another Premier League titan, Manchester United.

However, another young English defender with something in common with the Blues skipper who really should be part of the conversation when it comes to replacing the man the know as JT, is Newcastle United’s Jamaal Lascelles.

Lascelles began his career at Nottingham Forest, the same club that the young Terry represented seven times on loan in the 1999/00 campaign.

Although he is marginally less experienced than Keane or Gibson having only 88 league appearances to his name, he has certainly began making up for lost time since Rafael Benitez arrived at Newcastle United.

Possessing a physically-imposing presence that belies his 22 years, the significance of Benitez deciding to rebuild his rearguard around the Derby-native cannot be ignored.

He played a key part in the Magpies’ belated rally against the drop last term, playing five of their last six games, during which time they were unbeaten, keeping three clean sheets.

After a couple of false starts, he is also playing a leading role in Newcastle’s quest for promotion back to the top flight at the fist time of asking.

Lascelles has started their last three fixtures, each of which has seen the north-east outfit win to nil.

A season in a side expected to go close to winning the Championship will do plenty to prepare the youngster for playing for a club expected to challenge for honours and he would make a fine summer purchase.

Chelsea are 9/2 to win the Premier League this season.