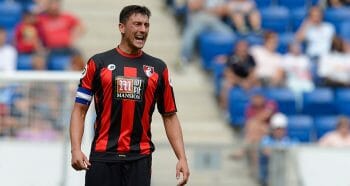 Luckily for the Dutchman that isn’t a scenario he has to put up with, but for Bournemouth’s Eddie Howe its a very real, pounding headache.

After acquisitions Max Gradel and Tyrone Mings were both ruled out early on in the piece with knee injuries, five-goal striker Callum Wilson followed suit in late September and now club captain Tommy Elphick is out of action for 10 weeks.

Howe confirmed his skipper required an operation on an ankle injury sustained in the 1-1 draw with Leicester and is two weeks removed from going under the knife.

Lady Luck is not viewing the south coast club too kindly at the moment and the absence of the side’s spine is a cause for concern ahead of the Premier League’s return.

The Cherries have a trip to Manchester City as their first assignment following the international break and are 7/1 outsiders to claim a victory with bwin.com.

If those odds don’t look too appetising, then the bookmaker’s price for the top-flight newcomers to be relegated may look more appealing considering their injury issues.

Bournemouth are still available at 5/2 for the drop this term, which is an industry-best price for the selection.

At the moment there isn’t much reason to panic. The Dean Court club sit four points ahead of the drop zone, Glenn Murray is a strong replacement for Wilson up front and the side’s goal difference is better without Elphick than with him.

However, the Premier League season is a long hard grind for clubs hovering over the trapdoor and any more injuries could just break the camel’s back. By then, their price for the drop will have shrivelled so it makes sense to invest now.