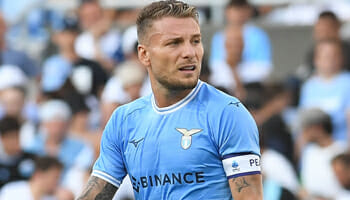 Lazio are 5/1 second favourites behind West Ham in bwin’s Europa Conference League predictions after drawing CFR Cluj in the knockout round play-offs.

The Hammers are already through to the last 16 and head the betting on 4/1 to lift the trophy, while I Biancocelesti drop down from the Europa League.

Former Chelsea boss Maurizio Sarri must target this competition after Lazio lost 1-0 at Feyenoord on Matchday 6.

They picked up seven of their eight points on home turf and will look to take control of this tie in Italy on February 16, before travelling to Romania a week later.

Serie A rivals Fiorentina, who were second to Basaksehir in their Conference pool, face a tough test against Braga, with these teams quoted at 9/1 and 15/2 respectively to go all the way.

Bodo/Glimt finished third behind Arsenal and PSV in Europa League Group A and can be backed at 20/1 here after being paired with Lech of Poland.

Sheriff must face Partizan Belgrade after trailing Real Sociedad and Manchester United and they are 40/1.

In the other play-off ties, Qarabag meet Gent, Trabzonspor tackle Basel, AEK Larnaca face Dnipro and Ludogorets will do battle with Anderlecht.

Among the teams already through to the last 16 alongside West Ham, 2021 Europa League winners Villarreal are 5/1 for outright glory in bwin’s Europa Conference League predictions.

Djurgarden, Sivasspor and Slovan Bratislava complete the line-up, with the final taking place at Prague’s Eden Arena on June 7.