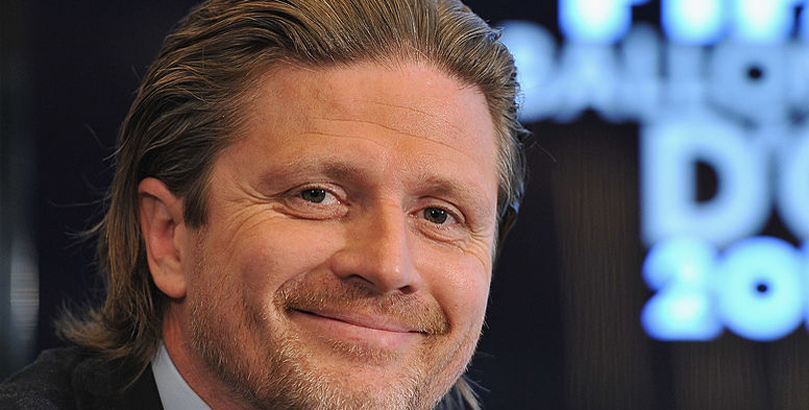 Emmanuel Petit has played in an FA Cup final for both Arsenal and Chelsea, lifting the trophy in his first season with the Gunners but losing to his former club in the 2002 final. We caught up with the Frenchman to get his thoughts on the 2017 showpiece and what Arsenal need to do to challenge for the Premier League title once more.

It is Arsenal vs Chelsea in the FA Cup final this weekend. Where do your loyalties lie?

I’m more of a Gooner than a Blue. My relationship with the club and fans at Arsenal was better than it was at Chelsea.

I hope that Arsenal win but I am not sure now with Koscielny being out with his red card and being suspended. I don’t know about Sanchez’s injury either. After the game the players and the managers will have been disappointed to have finished just the one point behind Liverpool and missed out on the Champions League, so mentally and psychologically it’s not been a good day for Arsenal. It’s not the best way to prepare for an FA Cup final just six days later.

It’s hard for Arsenal as Chelsea will have been celebrating winning the title and they will want to confirm the Double. It was the last game for John Terry as well – it’s been sunshine couple of days for Chelsea and clouds for Arsenal so it’s not the best preparation.

Will Wenger stick with 3-4-3 this weekend?

Wenger changed tactics for the game against Middlesbrough. Since they changed the formation, they’ve only lost the one game, against Spurs in the Premier League, and they have won all the others. So I am sure he will stay with those tactics. It all depends on what his plan is now with Koscielny injured.

Is the FA Cup still the biggest competition in the world?

The FA Cup is the oldest competition in the world. The French Cup has been underestimated in recent years and you can see that’s driven by the desire to play in the Champions League. Sometimes the fixtures fall between critical league fixtures which is why you see the turnaround of personnel for cup games. When it gets to the latter stages, you see the full team. National cups generally have been underestimated in the last 15 years.

I remember it was a hot day, cloudy and we played in Cardiff. We had to play against one of the best Arsenal teams ever. We lost to two beautiful strikes from Ray Parlour and Freddie Ljungberg. They didn’t have many chances but scored two beautiful goals and on that day Arsenal deserved to win the FA Cup.

Arsene Wenger is under a lot of pressure going into the game. What’s your opinion? Do you think he should sign a new contract and do you think he will?

I think there are too many people that forget what he has done for Arsenal in the last 20 years. I want Arsene to stay at the club and I wanted him to be supported financially.  I understand the fans’ frustrations and the frustration of players like Sanchez with his comments lately, but Arsenal have had to be very very careful over the last 10 years due to the bank loan for the Emirates Stadium. They have been shy in the transfer window and traditionally have run with a salary cap.

That’s why this summer, without Champions League football, Arsenal have a big decision to make when it comes to the transfer market. If you want to send a message to top players to come and join Arsenal, the fact you aren’t in the Champions League doesn’t help. To make up for this, you have to compete financially and put your chequebook on the table. You must break the salary cap but I am not sure Arsenal are willing to do that. It’ll be interesting to see how they plan to compete in the transfer market.

Arsene Wenger said that the uncertainty around his future has affected the team’s performance and the atmosphere in the Emirates this season. Do you agree with this?

I agree it has affected the team. This season was very stressful for the players and managers. It has also been frustrating for the fans, especially in the Champions League. We are used to having trouble every February at the last-16 stage but this season against Bayern Munich was total humiliation.

That will have been difficult for the players in terms of seeing how far from their level they are from the top clubs in Europe. That will have a major impact psychologically.

The speculation about Arsene’s future too, along with the fans being totally split as to what they want to happen, is not the best environment for the players and manager to work in. So you are constantly working against a lot of adversity off the pitch, before you even deal with the challenges on the pitch.

It’s been very stressful for Arsene, but when you look at the Premier League for example, it has been a historic year. Spurs have had the best defence and were the highest goal-scorers yet they finished second, whereas Chelsea have been the best in terms of how many games they have won and points they have scored. There has been a lot of intense competition this season – it was no surprise to me to see Chelsea win the league. They had N’Golo Kante and didn’t have to worry about European competition so it’s not a big surprise.

I want Arsene to stay at the club, but Arsenal need to support him by paying higher wages and spending more on transfer fees.

If Wenger were to leave Arsenal, who would you look to bring in?

Massimo Allegri and Diego Simeone would both be good and there are also rumours in France about the Monaco coach Leonardo Jardim, who is very highly rated. He has done well in the Champions League and in bringing through the young talent, whilst still winning titles.

Allegri has set records at Juventus and I am a big fan of Simeone for what he has done at Athletico over the past four years but I really like Jardim as well. A lot of managers will come and be able to manage Arsenal, but I really want Arsene to stay.

Patrick Vieira is a friend of yours – can you see him one day managing Arsenal?

I’d love it as he is a dear friend of mine, I love him as a person. We were very successful together at Arsenal. We took the first steps 20 years ago in changing the style of football that Arsenal played. When I came to Arsenal it was always  ‘1-0 to the Arsenal’.

In the last 20 years, the brand of football on the pitch has entirely changed, but Arsenal have to start competing for titles. Teams and players are remembered for winning titles. It doesn’t matter how beautiful the football is, nobody will remember it if you aren’t winning titles.

If you want to be competitive, you need to spend a lot of money. I know Arsenal have won two FA Cups and there may be a third to come, but they need to spend money to go to the next level. This is something that is really important and maybe one day Patrick Vieira, Dennis Bergkamp or Tony Adams can come back and be manager, even Thierry Henry. But these guys need to go away, get their experience and then one day they will be ready. They need the day-to-day experience of running training sessions and communicating with a squad of players.

You have to remember though that just because you were a great player doesn’t mean you’ll be a great manager. The manager’s job is so demanding – you have to forget your wife, your kids and you concentrate 24/7 on football. If you want to be successful as a manager, you need to be married to your club.

What are Arsenal missing that is stopping them being a true title challenger?

There are some players at Arsenal who have been at the club for ages and there is never a surprise from them.  They are sitting on five-year contracts at Arsenal, on big money, but you have to do more. Look at Chelsea, look at how Conte has come in and instilled a winning mentality and encouraged his players to trust their team-mates. That hasn’t happened at Arsenal this season.

Arsenal went on a good run lately but it’s because the players know it’s the end of the season. They managed to win recently, but it was losing to Watford and Crystal Palace that caused the issues. There was no fight on the pitch in those games. Arsenal players disappear in these type of games where they need to be physical. This is something that is recurring in the last two, three, four, five years.

Something has to change and I totally understand what Sanchez said. He was right when he said that Arsenal need big players this summer with a winning mentality. You have to hate losing games. Half of this team come on the pitch thinking trying to play good football is enough. There is no point playing nice football if you aren’t winning.

Are Arsenal missing an out-and-out goalscorer? Benzema, Lacazette and Mbappe have all been linked.

If I am Benzema, I don’t leave Real Madrid for Arsenal. Never. If Madrid want me to stay, I don’t leave. Mbappe will never come to Arsenal as he will cost at least 100 million euros and you have to break the salary cap and I don’t see Arsenal doing that! Real Madrid and Barcelona are also interested so it’ impossible he goes to Arsenal.

I think Mbappe will stay for one more season as the World Cup is coming. This season he’s been brilliant but he’s still young. If you hear what he and his family say, he’s very happy at Monaco. It’s not just him – all the young players at Monaco have improved so much so I don’t see him moving, unless Jardim leaves of course. If that happens, it alters a lot of players’ plans.

If Arsenal want to be competitive next season, they need to spend money. They are in danger of having a loser image. Look at the academy. Ten years ago you had Gibbs, Wilshere and others coming through the academy and that’s not happening any more. If you don’t have them coming through, you have to spend money. They need experienced, international players with winning mentalities.

You need players like attack dogs – look at Madrid. They have Ramos, Casemiro – they are the fighting dogs on the team and then you have the technical players. At Arsenal, only Koscielny is going to fight to get the ball.

At Arsenal, you can’t rely on Xhaka and Coquelin to do it all. You need a team-mate who will look you in the eye and scream at you and say ‘this is Arsenal, that is not good enough’. Look at Ronaldo at Real Madrid, he has such a winning mentality and he is an example to others.