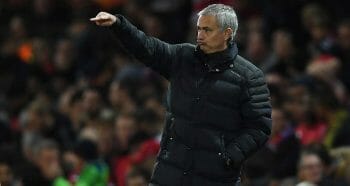 Not once in his English football career has Jose Mourinho taken a pounding as big as the one endured at Chelsea last weekend.

Manchester United’s 4-0 steamrollering at Stamford Bridge was all the more embarrassing for Mourinho given he was returning to the club that sacked him last December and, with a midweek meeting with old enemy Pep Guardiola and Manchester City on the horizon, the Portuguese’s problems may well intensify.

The Citizens visit Old Trafford for the second Manchester derby of the season, this time in the EFL Cup, having prevailed 2-1 when the duo met in September.

Prior to last Sunday, the 53-year-old had only ever endured five losses by a margin of three goals or more since initially taking the reins at Chelsea in 2004/05. Victory was the response to each of these defeats.

A 3-1 FA Cup win over Colchester followed a 3-0 reverse at Middlesbrough, the heaviest suffered during his first term as Blues boss.

Sampdoria inflicted the most emphatic loss of Mourinho’s Inter Milan tenure, winning 3-0 in a Coppa Italia semi-final clash. The Blucerchiati’s city foes Genoa were toppled 2-0 in the Nerazzurri’s next match.

A 2-0 win over Valencia lifted a modicum of the misery Real Madrid’s famous 5-0 hammering at the hands of Barcelona caused in 2010/11, while Los Blancos beat Atletico Madrid 2-1 the following season in the aftermath of a 4-1 Champions League defeat by Borussia Dortmund.

Back at Chelsea, the 2014/15 season was rounded off with a 3-1 victory over Sunderland, which followed a 3-0 loss at West Brom in the penultimate outing.