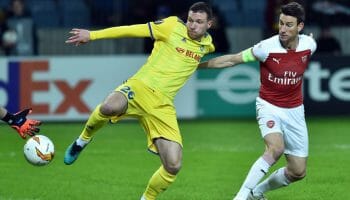 BATE Borisov and Dinamo Brest contest the Belarusian Cup final for the second time in three years and third time since its inception.

Two of Brest’s three cup triumphs have been against BATE, with these teams two of five to have lifted the trophy on a record three occasions.

BATE, whose last success in this competition came in 2015, are the form team and can gain revenge at the Dinamo Stadium.

Punters can get 4/5 for them to prevail in normal time and that is our opening BATE Borisov vs Dinamo Brest prediction.

BATE have progressed to the final in swashbuckling style having rattled in 20 goals in six ties.

After thrashing Sputnik 5-2 in the round of 32, BATE thumped eight past Torpedo Minsk, with Hervain Moukam helping himself to a hat-trick.

They then overcame fellow Vysshaya Liga side Dinamo Minsk 5-3 on aggregate in the quarter-finals before coming from a goal down in the first leg to beat Slavia Mozyr 2-1 in the last four.

There have been 15 different scorers, along with one own goal, so there have been contributions from the whole of boss Kirill Alshevsky’s squad.

Having seen their 13-year dominance ended by Brest last season, BATE are back at the top of the table following a run of seven wins in an eight-game unbeaten streak.

They beat Brest 3-1 in the league on Wednesday which was their fifth straight win and they have kept five clean sheets in the last eight league fixtures.

Looking at the BATE Borisov vs Dinamo Brest odds, we like 37/20 that Alshevsky’s men lead at half-time and full-time.

Dinamo Brest’s path to the final has been in stark contrast to BATE’s.

The defending league champions have scored only eight times in their six matches and required a penalty shoot-out and a win on away goals to reach the showpiece.

Their campaign started with a 1-0 victory at Ruh Brest before coming from a goal down at half-time to beat FC Minsk 3-1.

A crazy first leg of their quarter-final against Isloch saw both teams finish with nine men in a goalless draw with Brest advancing via penalties after the second tie also ended 0-0.

They then seemingly had one foot in the final when they took a 2-0 first-leg lead against Shakhtyor in their last-four clash.

Brest were cruising when they led 2-0 at half-time in Soligorsk only to concede four times after the break to stumble over the line.

Their maiden title defence has also not gone to plan having lost five of their 10 games so far and five of their previous seven in all competitions.

Sergey Kovalchuk’s side have scored the last goal in 10 of their 16 league and cup matches so 3/2 they do so again is our final BATE Borisov vs Dinamo Brest prediction.