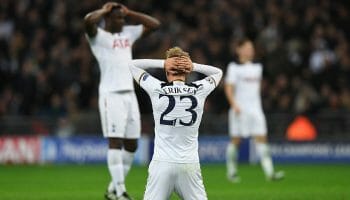 Tottenham were convincing winners when they faced Chelsea at White Hart Lane in January but repeating that performance in an FA Cup semi-final at Wembley is a much tougher task.

Chelsea have been the dominant team in the Premier League this season and victory here would take them another step closer to the domestic double.

Tottenham playing their European games at Wembley this season should have given them the edge as they return to the national stadium but their disappointing exits in both the Champions League and Europa League instead gives Chelsea the psychological advantage.

The Spurs team which beat Chelsea 2-0 in the Premier League was nowhere to be seen when they slipped up against Monaco, Bayer Leverkusen and Gent in European competition while they also conceded first against CSKA Moscow.

Tottenham are 5/4 to qualify for the FA Cup final but they have faced Chelsea in the competition three times since the turn of the century and lost on each occasion by an aggregate score of 11-2.

The 1-0 victory over Manchester United in the last round kept Antonio Conte’s Chelsea on course for the Premier League-FA Cup double, an honour which eluded his predecessor Jose Mourinho during his time at Stamford Bridge.

They are the 2/1 favourites to win the competition but will be wary of a Spurs team which ended their 13-game winning streak in the Premier League. After the semi-final draw was made, Conte said: “We start with one win for us and one win for them. For sure it’ll be an interesting game.”

Chelsea’s record in the Premier League this season shows they are the best team around right now and there is no reason not to back them in the cup competition.

The odds on Chelsea to beat Tottenham in 90 minutes are 11/10 and is our best bet for the FA Cup semi-final.