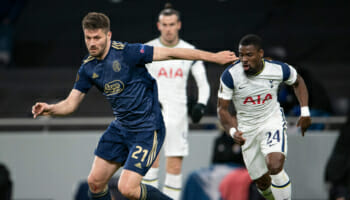 Tottenham hold a 2-0 lead heading into the second leg against Dinamo Zagreb and should reach the quarter-finals of the Europa League without too much fuss.

Harry Kane’s brace proved decisive in the first leg last week and another solid defensive display would see Spurs through.

Keeping things tight at the back is likely to be the game plan and under 2.5 goals at 19/20 is our opening Dinamo Zagreb vs Tottenham prediction.

Zagreb will believe they still have a chance of going through but they have a lot to do in the Croatian capital.

They arrived in north London last week on the back of an eight-game winning run and the night could have taken a different path had Mislav Orsic taken a golden chance presented to him in the opening minute.

A wayward pass from Tanguy Ndombele set Orsic in the clear but once he got into the penalty area, his effort was tame and straight at Hugo Lloris.

Kane punished them when he had the opportunity but Zagreb boss Zoran Mamic has not given up hope of a comeback.

“Kane showed us again what a master of football he is,” he said. “The second goal, the way he calmed the situation and then his shot was impossible to defend.

“There I always hope in football, anything is possible, we must believe. You enter every game to win and you cannot start a game thinking we are definitely going to lose. I think we are going to have more chances in Zagreb.”

Mamic has subsequently resigned in the wake of being handed a prison sentence following a conviction for fraud. Damir Krznar, who was Mamic’s assistant, has been handed the job and should ensure continuity in terms of the team’s philosophy at least.

Zagreb have kept six successive clean sheets on home soil in all competitions which backs up our view that this could be a low-scoring game, so we’re going for a goalless first half at Dinamo Zagreb vs Tottenham odds.

Spurs are now six points behind fourth-placed Chelsea, albeit with a game in hand, and cannot afford too many more domestic slip-ups if they are to secure a Champions League place via their Premier League position.

Jose Mourinho was impressed by what he saw of Dinamo last week, saying: “They defended well. When the result was 1-0 in the second half they tried to keep that result so they still stayed in a low block and defended well.

“So it’s not easy. The result could be a little bit bigger. A third goal would have come and fit very well in the reality of the game, but it is what it is.

“It’s still open. We have to go there and play a serious match because 2-0 we are not yet in the quarter-finals.”

That suggests Mourinho will put a strong team out and we’re backing a 1-1 draw at 6/1 as our final Dinamo Zagreb vs Tottenham prediction.