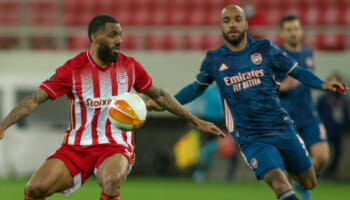 Arsenal were knocked out of the Europa League by Olympiacos last season despite winning the first leg so will be hoping lightning does not strike twice at the Emirates Stadium.

The Gunners are in control of their round-of-16 tie after a 3-1 win in Greece last week and their confidence was further boosted by Sunday’s north London derby victory against Tottenham.

That was a fourth win in the last five games, all of which have featured at least three goals in the match, so a home and over 2.5 goals at 19/20 is our opening Arsenal vs Olympiacos prediction.

Arsenal threatened to be architects of their own downfall once again in the first leg but two late goals mean they have one foot in the quarter-finals.

Martin Odegaard’s first Arsenal goal had them ahead only for another defensive calamity to gift Youssef El-Arabi the equaliser just before the hour while the Greeks were presented with two other good chances to score.

Arsenal were rocked but recovered well and hit two goals in six minutes as a Gabriel Magalhaes header and a fine strike from substitute Mohamed Elneny earned a deserved victory.

“We are really pleased with the result, with the goals and the way we played in big moments in the game,” said Arsenal boss Mikel Arteta.

“But as well, we have to be very clear and honest with ourselves. We gave three goals to the opponent, they took one and at this level they are going to punish you.

“If we want to go to the next level we have to stop doing that and be more ruthless. When you are that dominant and playing that well, just kill the game.”

Olympiacos must go for goals to get back in the tie and backing both teams to score in the first half has paid out in four of Arsenal’s last five matches.

Olympiacos were left to rue several missed opportunities when Arsenal’s late goals left them with a mountain to climb in the second leg in London.

The visitors are 13/2 just to win the return match but head coach Pedro Martins has vowed his team will not go out without a fight.

“The second goal for Arsenal was decisive,” he said. “Of course, the situation now is not favourable for us but we will go after our chances in the second leg and fight for the best.”

Olympiacos conceded twice in the last 15 minutes of the first leg and it was a similar story on their last visit to England in November when they leaked two goals in the last 10 minutes of a 3-0 Champions League defeat at Manchester City.

Heads could drop if the tie is effectively over in the closing stages, so we fancy the hosts to score the most goals from the 75-minute mark as the last of our Arsenal vs Olympiacos betting tips at 31/20.